“Cauldron are one of the most exciting bands I’ve ever seen” – Dave, punter at Brofest 2014

If you’ve ever seen CAULDRON live you’ll appreciate Dave’s – sorry, mate, didn’t catch your surname! – comment after the band’s devastating live set at Brofest a few years back. “That’s good to hear,” responds bassist/vocalist Jason Decay when I mention it to him as an ice-breaker. “I can see that, because we play a little dangerous live; we’re just a three-piece and we have a lot of stuff to try and pull off, and we also try and put a lot of energy into it at the same time. I’ve always said that it’s exciting and dangerous playing live. You feel like things could break down at any moment, but most of the time we do pull it off!” he concedes with a laugh.

And aside from being one of the most exciting, they’re also one of the tallest bands in the world too. “It’s true,” Decay confirms. “Only people that have met the three of us in the flesh know that. Photographer Ross Halfin once refused to shoot us until he realised that we were the ‘biggest’ band in the world, or at least in Canada!”

Chitchat over, the reason for our conversation is ‘New Gods’, the Canadians’ fifth album since they opened their account with ‘Chained To The Nite’ in 2009. Decay and his bandmates Ian Chains (guitars) and Myles Deck (drums) are keen to hear what people make of it seeing as, in Decay’s words, “stylistically, it’s a little bit different. So I think there is a bit of worry about it – will people like it? Will they accept it? – in the sense that it’s definitely more melodic, more song-orientated than ever, even though we’ve always been a song-orientated band. But we really kind of threw any sort of rule that might be pinned on us out the window with this one. We approached it like it could be our last record, so we just put the songs first and we ignored any rules that might limit the songs. We’ve always felt that what we’re best at is songwriting, more so than being musicians. I mean, we’re OK musicians, but we think the one thing that we specialise in is songwriting. So we really went for ‘put the songwriting first’ above anything with this record. We didn’t let any sort of styles or rules hold us back.

“Sometimes,” he continues, “when you’re trying to write, it’s like, ‘OK, the record needs one or two fast songs’ and things like that, and you actually put too much structure on the record. 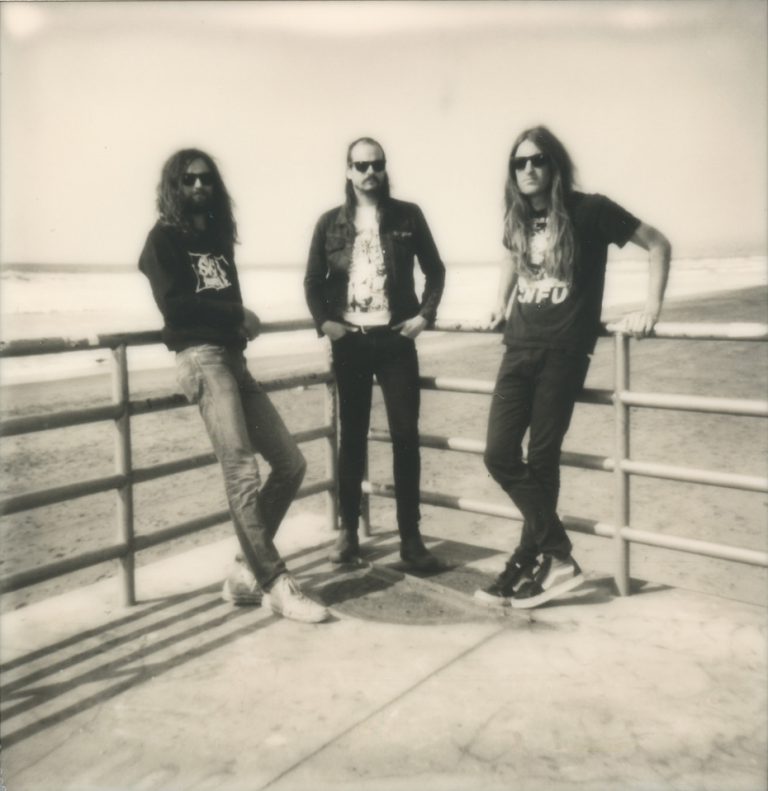 On this record the first four or five songs start on guitar, and our producer thought that that might be an issue. But we just over-ruled him – y’know, ‘this is the feel we want, this is the flow we want’ so we’re going to go against that rule that says that every song can’t start on guitar. It worked, and it’s for the sake of the songs, and not for the sake of the album.

“I think we’ve actually gone a little bit more in the ‘throw the rules out the window’ direction with every record, or, I don’t know,” he laughs, “maybe we never had any rules to begin with. But at the same time we’ve always prided ourselves in doing the same thing, like Motörhead or AC/DC. We’re a brand, and we’re known for our brand, and we deliver that brand to the people who know us. So let’s say that maybe there’s a little bit of compromise in our brand on this one, but that’s no bad thing in itself because of the strength of the songs. And I think if you listen to the record a few times you’ll get it, and you’ll understand why we did what we did.”

The lyrics all came from Decay’s pen, with inspiration coming from what he calls “the bad things that happened. I guess it’s the only time I feel like writing something, actually. But, I mean, it was a dark period: the two years of the making of this record was a bad time, both for the band and personally. First of all, we got in a bad accident on tour that almost killed Ian and put us on hiatus for a while [the band were involved in a car crash in Texas in February 2016]. I lost my dad during the making of the record, and someone else I was very close to too. So it was a difficult two years, year-and-a-half or so. It was a bit of a struggle, or more of a struggle than anything else we’ve done. But that just happened to be when we were writing that record and it came out that way. We’re past it now, and things are better so…” he trails off. The exercise, was, however cathartic. “When I listen to it now, I’m glad that everything’s documented,” explains the extremely thoughtful, quietly spoken frontman. “Even though it’s vague enough that anyone can probably relate to it on their own level – I tried to keep the lyrics so that they that could be open to interpretation – for me it’s very personal. And that’s something we’ve never done before. We’ve never really opened up that much.”

I wondered what Decay’s highlights on the album were. “My favourite song would be, probably, the third one ‘No Longer’. I just like the way everything came together on that one. I think I’d give it ten-out-of-ten for performance as a band and myself, and for the production too; the mix on that one just came out ten-out-of-ten as well. That would be my number one.”

And your number two? “Probably ‘Letting Go’ – the second track – I think the writing on that one for me is a ten-out-of-ten as well. The best songs, I think, are the ones that come the easiest, which is ironic, I know, but somehow it’s true. It’s the ones that write themselves that come out best.

‘Letting Go’ is an example. Ian had a couple of those riffs and we’ve been farting around with them for years. Then one night he came over and recorded them and went home, and I just put them all together in in a completely different order and it just totally transformed the song from, like, a kind of B-side to an A-side, just by re-arranging the order of the riffs. But other songs you wrestle with for a year or two before they’re done.  And those usually end going at the end of the record,” he adds, with another laugh.

So you don’t give up on a song and ditch it? “No, keep it, because you never know. There was a song on the last record, ‘Delusive Serenade’, the instrumental one, which I had written in high school in 1997 but it was always missing something until Myles had this part. When I heard it I thought ‘that’s the perfect part to complete my song from twenty years ago!’ So we used it and we love the song now. And the last song on the new record was actually recorded for the last album but was never finished, never completed, and I’m glad it wasn’t because it came out so much better than it would have on the last record. So, I guess my best advice would be ‘don’t force the song’ – if it’s not happening now don’t force it, sit on it, although it could be a couple months or fifteen years before it’s done.”

So what’s the one Cauldron song you’d like to be remembered for? “One song?” he blanches. “Is that it? That’s tough.”

I never said this was easy! OK, the one you’d like on your tombstone. “That’s so tough, so tough…” he says. “I don’t know; you want me to think of a message for my tombstone? OK, we’ll go for ‘Summoned To Succumb’ – I think that’s appropriate!”

And if the band were marooned on a desert island and things got desperate, which member of the band would you eat to survive? Decay thinks for a moment. “You know, I have a feeling the boys would eat me first!”