The UK has a rich vein of hot new bands breaking through, and one such act is TOLEDO STEEL. Formed by vocalist Rich Rutter and drummer Matt Dobson in late 2011 Toledo Steel have recently released their debut album ‘No Quarter’ on Dissonance and Rutter was more than happy to go through the band’s history.

“I met Matt (Dobson) on a night out at the local rock club. Prior to this I’d tried to start this kind of band for a few years but didn’t have much luck finding likeminded people up for it. Once Matt was on board though it was full steam ahead, and it didn’t take long before we had our first full line-up and enough songs to hit the stage for our first gig. We were quite lucky to get some good gigs right off the bat and that allowed us to quickly break out of the local area and take the band further afield within the U.K. I think our fourth or fifth gig was supporting Cauldron in Edinburgh and then a following show in Newcastle.” 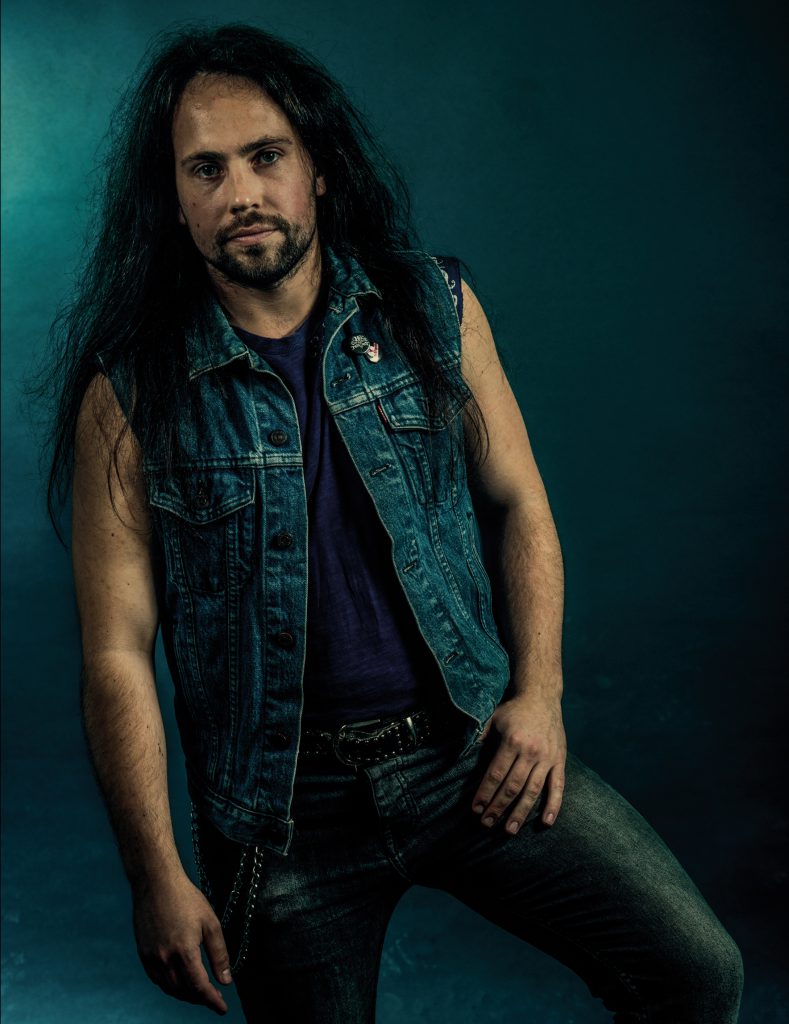 By this time, the band already had what Rich calls “a rough demo” consisting of three tracks, but were keen to go into a proper studio and set to work on something more official. Released in August 2013, and with a line-up featuring guitarists Tom Potter and Kyle House and bassist David Lovell alongside Rutter and Drummer Dobson, the three-track EP helped spread the name and opened a few doors. 2014 saw the band opening the second Brofest bash in Newcastle, and also playing for the first time outside the UK at a festival in the Netherlands. “We were on crazy early but that of course didn’t matter; we were having a great time and happy to be embracing the opportunity to push the band out there more so! This line-up of the band stayed consistent for a few years and within this time we continued to play as many shows as possible and we also released our second and slightly longer EP ‘Zero Hour’ [a thirty minute, six-track metal-lover’s delight]. Fast forward a couple of years,” he concludes, “with a few line-up changes we’re now signed to Dissonance Productions with our first full-length out finally. There have been a few ups and downs along the way but we’ve stuck at it and even with line-up instability here and there, we’ve remained consistently active and out there playing live shows.”

Choosing a name can be complete agony for some bands, yet Toledo Steel managed to come up with something both fitting and original with the minimum of fuss. “Luckily for us, I don’t remember it taking too long to settle on the name. Matt was a keen fencer at the time and liked to collect medieval weaponry. Toledo in Spain is where they used to forge swords for the military which were known to be incredibly strong. The link between Matt’s interests were already there and the name Toledo Steel just seemed totally fitting for the kind of music we wanted to write. I guess,” he adds, “being a few years younger at the time, we didn’t overthink it too much!”

The band’s debut album ‘No Quarter’ was released in June, and the band are over-the-moon. “Yeah, we are totally happy with it. It’s great to finally get that first full-length release out there. In my opinion, we should have done it sooner but the time wasn’t right; the main thing is that we got there eventually and put everything into it to make it sound the best we could.

“It’s very different from the EPs, that’s for sure,” he continues. “It has a much harder hitting sound in comparison to our previous releases. We tuned down half a step which is better for me, firstly, and also lends to a slightly bigger sound. It’s maybe a little rawer, too. We feel that the production is better, no doubt, even though we didn’t overdo it in the studio with regards to the mixing. Overall, it still retains our sound, although the songs are more riff-based than before and although the melody is still there some of the songs are quite straight ahead and to the point. But the songs all had to have their hooks and catchy choruses too. We wanted our first album to be pretty in-your-face sound-wise with a good dose of attitude and energy – bang! We’re Toledo Steel – y’know, that kind of thing.”

Pressed for personal highlights, Rutter is quick to shine the spotlight on the band’s guitarists. “The guitar work of Tom Potter and our new second lead guitarist Josh Haysom really stands out for me, especially their solos! I think overall though we’ve all managed to capture an energy that’s a good representation of what to expect from us live. If I was to pick out three songs that I like the most I’d go for ‘Visions In The Fire’, ‘Heavy Metal Headache’ and ‘When The Night Draws In’. I’m proud of all the songs, though, of course, in some way or another.”

‘No Quarter’ was recorded by Rutter, Potter, Haysom, Lovell and Dobson, but since its release Toledo Steel have lost their bassist which means “…we’re currently a four-piece again,” sighs the frontman. “Josh is playing bass until we find a permanent member to fill the position. We’ve been a five-piece before, of course, and the twin lead has always been the ideal. You’d think it would be easy to find somebody committed and competent enough to join a band, but apparently it’s not. We have been unlucky on that front. The core of the band is solid though and, as a four-piece, everything feels great and the atmosphere is the best it’s ever been; but we still need that final piece of the puzzle, so to speak. I think the problem is that some people are more into the idea of being in a band than the reality of what’s it like, unfortunately.”

Given the ups and downs of keeping things going, you have to wonder how a band like Toledo Steel maintain their motivation. “I think that our passion for the music and wanting to strive forward year on year is what keeps us motivated,” Rutter offers. “Signing to Dissonance is no doubt another big motivator to really go for it and push the band name out there more and more. And being in a band is also a great way to see new places all over, places you wouldn’t necessarily visit normally. The experiences you gain and the writing of new songs and live performances are a great outlet for anyone doing this. All in all, it’s a positive thing to be involved with and even though I’m sure we could all find other things to fill our time, this is far more rewarding and exciting!”

Trivia makes the world go around, and before calling it a day I asked Rutter for some trivia about the band or

his bandmates. He thinks for a moment. “OK, well, the first bit of trivia would be that Tom Potter is a notorious guitar string snapper! He’s lucky if a set of strings last him for three full gigs. He takes a spare guitar ready to go every show just in case. And the second thing that springs to mind would be that when we bounced down our first ever demo of ‘Speed Killer’ back when we started, it was 6.66MB!

And finally, if the band were marooned on a desert island, and things got desperate, who would you eat first, and why. “Now that’s a tough question,” he laughs. “Tom Potter, I’d say, because even though we’d lose him as a member, we’d stay alive and on the flip side we may end up gaining his guitar skills, just minus the string snapping habit of course!”

TOLEDO STEEL’s debut album ‘No Quarter’ is available to buy and stream now.

PRIDE BEFORE A FALL – Steve Grimmett talks about the rise and fall of Lionsheart, the melodic rock band he fronted in the Nineties.