With vocalist Jamie Elton leaving the UK and retiring from Amulet, the band set up a clutch of dates to wish him well which bassist Sam Mackertich chronicled for posterity.

Our brutal drummer Neil [Ganesha] and I flew to Eindhoven to collect our van and backline and then drove to Hamburg to meet the others. The journey was long, wet and perilous, and it’s a miracle we survived. Although we were very late, everyone was very pleased to see us when we arrived with the essential equipment, and Bambi Galore is a nice, modern basement venue.

The young support band were as German as they come. The drummer looked like a cross-country runner on speed and was a bit overbearing, socially. But they were very friendly after our show.

We played well, with no technical mishaps. It was nice to see our departing singer Jamie rocking for the band, and nice to see him in general. Now he’s moved to Sweden and quit the band it seemed somewhat important to end things with him on a strong note. The only other thing I remember is the lady who had brought a huge carnival-sized teddy bear to the front row to head-bang with her. We posed with it for photos later. Neil went off with a friend only to appear at midday the next day after sight-seeing.

We stayed in a nice, clean and huge hostel next to a horse-racing track. A German chap nearly assaulted Jamie for parking our van too close to his car. Close call there! 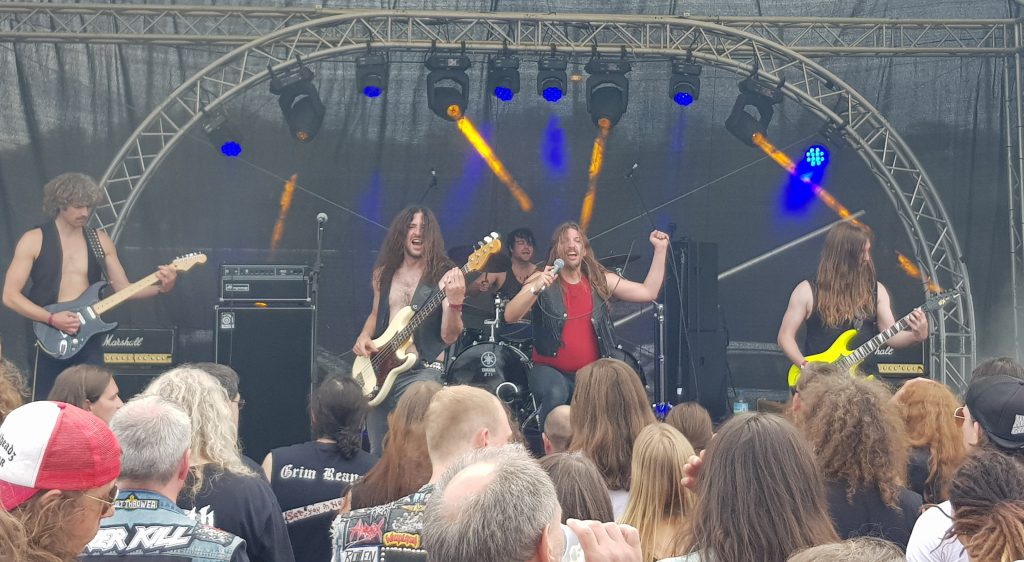 Fuck me, it’s a shithole. It’s like a crap version of East Berlin. And highly political, too. We stayed and played in a bizarre multi-purpose squat complex that’s not only the venue but our home for the night. Neil might well have driven us into the late 1960s.

The support band were called Tension. Talented stuff, great guitars, but absolutely no aggression or charisma. The largish venue was packed and it was really hot. The amps were weird but I think we just about delivered the goods. There was a bit of bass drum movement early on, but that was fixed with a concrete slab. There was a lunatic in the crowd going nuts to the heavier bits. Started grabbing us a bit too, which was strange.

Even though we slept on DIY bunk beds in a huge attic and were kept awake by the howling of wolves – actual wolves! – it was all actually loads of fun. The promoter was a lovely guy and we had all the healthy food and beer you could ask for. Sold! Danke!

Schnitzels all day long for the bands, as many schnitzels as you can eat! The festival was in a gorgeous setting, amazing view onstage looking off into the mountains. Chilled but professional set-up – one big outdoor stage with beer festival. Some bass drum movement again. We played in the afternoon so we had the rest of the day to get hammered. We were staying in some severely vintage accommodation, a traditional B&B with original Seventies’ décor. I loved it! In the morning the owner made us wait for his daughter who wanted a picture with us, which again was weird. In fact, they were both weird.

Our friends Dead Lord from Sweden were headlining the festival, so it was cool to catch up with those goons. Adam [Lindmark], their drummer, was a flamboyant Hangman for us on stage. Later on Jamie went on with them to sing a cover of Blue Oyster Cult’s ‘Burning For You’. Our guitarists Nip [Blackford] and Marek [Steven] had no idea, so it was funny to see their reaction when it happened. 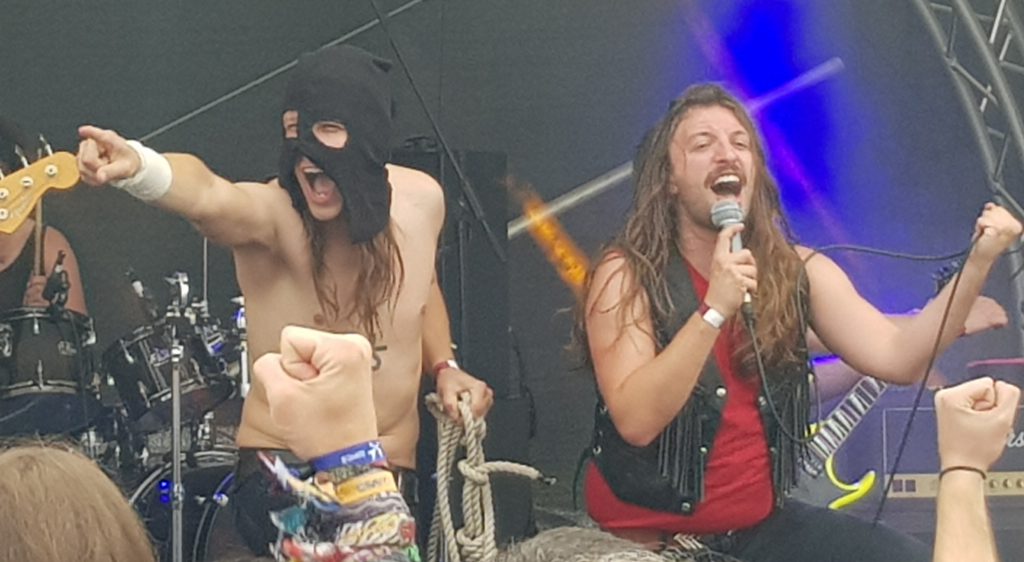 We went for a dip in an ancient volcanic lake en route back to Holland. Nice.  We were playing the small and legendary (and fun) rock bar venue Little Devil which has an extensive beer menu and an excellent DJ. The support were a band called Scavenger from Belgium, who started out in the glory days of the Eighties and struck unlucky when their label – the famous Mausoleum Records – went under. I really enjoyed their set, a slightly US sound with touches of speed metal. Our set was good but there was an unfortunate string break in the first song, and Jamie’s vocals were failing him dramatically. Lead guitarist Nip was playing through a ‘modelling’ amp abomination that looked more like the dashboard of a Renault than an amp. No bass drum movement though, which was good.

It was great to see a few stalwarts of the Euro scene there. Good old Emilio from Belgium was our last Hangman of the tour, and possibly the last ever. The Hangman has made an appearance at every gig almost for six years, so it may be time to execute him. We drank lots after the show and were the last fools in the bar, a sad sight.

It was a fun tour and a good send off for Jamie after all his years with the band. High-power new singer Fed – Federico Mazza, aka Mace – waits in the wings…

SATAN’S EMPIRE – HEART OF A LYON