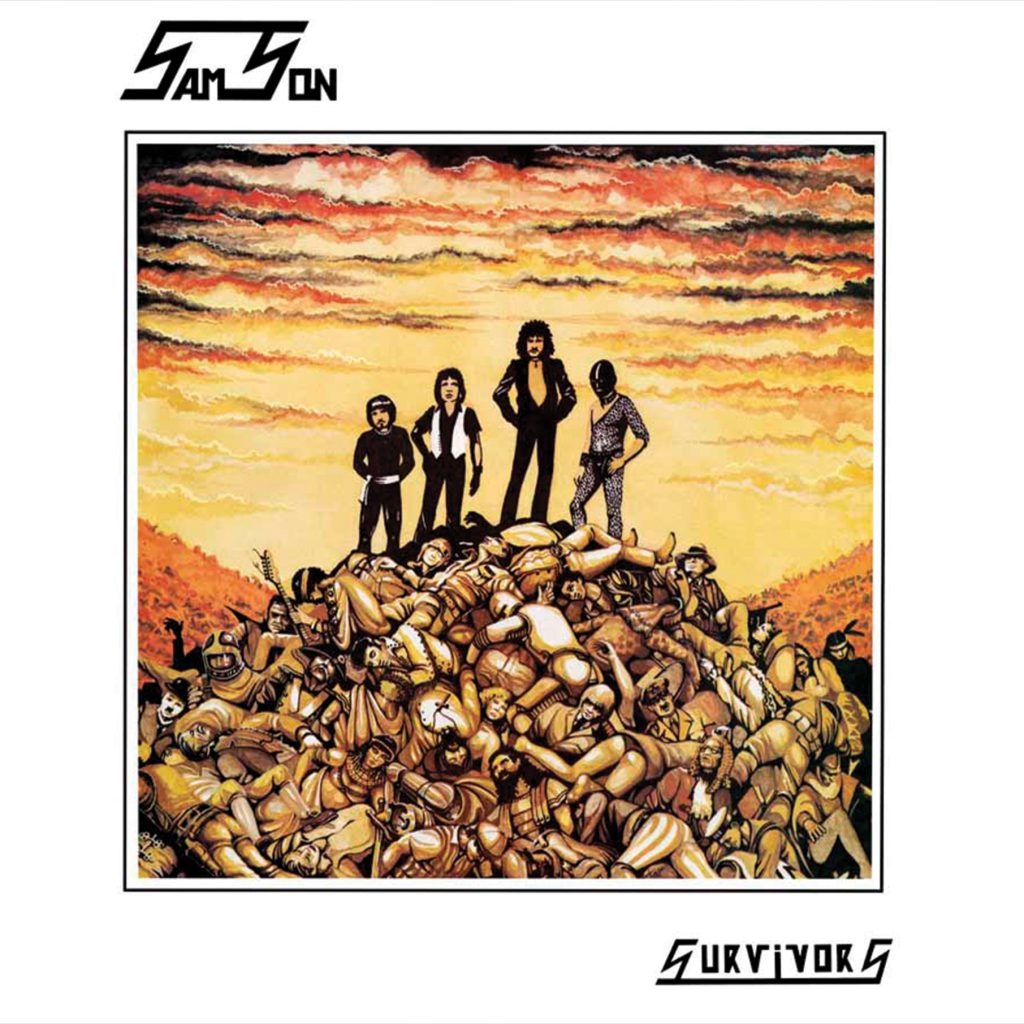 An album that’s often overlooked, ‘Survivors’ was recorded at a time of transition by a band that was rapidly beginning to evolve – or mutate – into an entirely different beast; ‘Head On’, the album they would release the following year, was, for those for whom the distinction makes a difference, a lot less hard rock and a lot more heavy metal.

Samson already had two singles for Lightning Records under their belts before they signed to Laser. Both ‘Telephone’ b/w ‘Leavin’ You’ (1978) and ‘Mr Rock & Roll’ b/w ‘Drivin’ Music’ (1979) featured a line-up of Paul Samson (guitars and vocals), Chris Aylmer (bass) and Clive Burr (drums) and both were produced by John McCoy, an old accomplice of Paul Samson’s and, by this time, Gillan’s bassist. With nothing really happening, the band split for a time and would eventually regroup with Barry Purkis on drums (Clive Burr would of course reappear as Iron Maiden’s skinsman in the early days of 1980) and Aylmer back on bass, and it was this line-up – with Purkis now known by all and sundry as his alter ego Thunderstick – that headlined the three band bill at London’s Music Machine in May 1979, the review of which gave rise to the naming of the New Wave Of British Heavy Metal. “While Samson’s musical ‘pedigree’ leaves something to be desired,” noted Geoff Barton in Sounds, “their stage effects were, as they say, something else. If I had to sum up the Samson show in one word it would be ‘excess’.”

With John McCoy as producer once again the band’s debut album ‘Survivors’ had already been put to tape. A single, a re-issue of ‘Mr Rock & Roll’ (flipped this time with ‘Primrose Shuffle’), appeared as a taster for the album on 29 June 1979, with ‘Survivors’ appearing sometime between June and November 1979 (there appear to be as many different dates as there are sources, and dodgy distribution didn’t help). But between the album’s recording and its release Samson had recruited ex-Shots frontman Bruce Dickinson, soon to be unveiled to the public as Bruce Bruce. Despite not appearing on the album he was added to the cover illustration of the band and bizarrely credited on the sleeve with “vocals, harmonica, guitar”. Furthermore, despite Aylmer’s bassist credit, McCoy handled all the bass parts. Fellow Gillan bandmate Colin Towns was drafted in to add keyboards.

“‘Survivors’ was a bitter sweet time for me,” says Purkis now. “With previous bands I’d always had musical input; I’ve always regarded myself a musician first and drummer second. But when I joined Samson and started recording with Paul and John I didn’t really have much of a say. They’d already written most of the material but there were a couple of tracks that we conjured up out of studio jams. ‘Koz’ was one and the other was ‘…Schoolgirl’s Bike’. But I did feel like just the drummer until I metamorphosed into ‘Thunderstick’ and began to gain a lot more attention. All bass parts were done by John, probably because, as I said, a lot of the material had been written by him and Paul when they performed together in McCoy.”

Despite his reservations about the band live, Barton gave ‘Survivors’ a four-star review in Sounds in November 1979 (and then placed it at No.19 in his end of year Top 20). “…Samson have come up with a hugely enjoyable heavy rock album that the headbanging fraternity will welcome… There are many better played, better sung and better produced records around,” he conceded, “but ones that make you toss back your head and go ‘YAAARGHHH!’ as this one does are few and far between.”

“I would agree that ‘Survivors’ IS an album that has for the most part been overlooked. And it was great to get good reviews,” says Purkis, “Many fans regard ‘Head On’ as the first Samson album, and I have to say that, for me, that album was far more enjoyable as I was able to put a lot of ideas into it and my playing was far more flamboyant. However, I think that ‘Survivors’ has stood the test of time. It was released in, I think, November 1979 because we set off on The Heavy Metal Crusade in November/December to promote it.”

This Dissonance version of the album adds ‘Mr Rock & Roll’ and ‘Primrose Shuffle’ (inadvertently called ‘The Shuffle’ on the digipack) as well as the seven vocal album cuts with Dickinson/Bruce providing the vocals.