October saw the release of Eliminator’s ‘Lost To The Void’, a collection which rounds up the material from their ‘We Rule The Night’ and ‘The Seer’ releases from a few years back. It also saw the five-piece out on the road once more for a clutch of UK shows which, by all accounts, were a lot of fun.

“Considering it was an intensely last-minute affair it actually went really well,” suggests guitarist Jack MacMichael. “There was a lot of travelling involved, but we played some great gigs and it was most enjoyable to see some familiar faces alongside plenty of new ones at the shows. We hadn’t played that many shows on the trot before, so it was quite nice to find out that we’re more than capable of doing so.

“Naturally, it wouldn’t a tour without a few oddball moments. I’ll give you some highlights: we ended up on a tour of a laboratory at Oxford University, and our drummer Dave [Steen] became an impromptu model in an ad for a technologically revolutionary rucksack; and I had a 5am karaoke duet with Matt Gerrard from Ascalon in a proper rough bar in Sheffield. So, you know, business as usual,” he laughs.

The roots of the band date back to 2005. “I met Matt [Thomas] at Lancaster University,” Jack recalls. “He was a drummer but wanted to play guitar in a band. We jammed for a couple of years with the intention of starting one, but finding the right people wasn’t that easy. We went through various line-ups until we had some semblance of a gig-worthy band and in 2008 started playing live, although mostly cover songs. The ambition was always to write original material but playing live was more important to us, so the covers had to do initially.

“After a few more line-up changes and a few stints playing even more covers at motorbike rallies which funded activities, Tak [Murata] joined the band (either around late 2009 or early 2010, I can’t quite recall). This was the first time we’d had a proper singer, so it was time to record and the result was the ‘We RuleThe Night’ EP which was released on CD by Portuguese label Aforja and later re-released on vinyl by Germany’s Heavy Forces Records. We scored a few decent gigs off the back of the EP and decided to record again in late 2011. This became The Seer 7” single released in 2012.

However, after a performance at Sweden’s Muskelrock Festival Tak left the band. “We were in limbo for a while looking for a new singer. Dave Pugh of Skyclad fame stepped in temporarily to help us out in late 2013. We played a few decent gigs with Dave in Spain, Ireland and Newcastle’s Brofest, but eventually Dave had to step down due to Skyclad commitments and things went on hold for a while.

“In 2016 I got a tip that Danny Foster, who I’d known for years, was a great heavy metal singer. I asked him to send a demo, and it turns out the tip was right – he sent us an excellent cover of Crimson Glory’s ‘Eternal World’. We asked him to audition and after a couple of sessions in the rehearsal room we asked Danny to join.”

It was now time to turn their thoughts to recording an album, and the result was ‘Last Horizon’, released by Dissonance Productions in March. Unsurprisingly the Eliminator guys are, in Jack’s words, “still extremely pleased with it. Obviously,” he continues, “with hindsight there are some parts here and there that individually we’ll be thinking ‘I’d do that differently now, but that’s more nit-picking than anything else. We think it’s really good and the rest of you will too if you know what’s good for you!” he laughs.

Eliminator 'Last Horizon from the Dissonance album of the same name

Jack says that the band listened to the new compilation ‘Lost To The Void’ “on the journey down south for the tour. It was the first time I’d listened to the songs in a while and it turns out it’s the first time Jamie (Brandon – bass) has actually listened to either ‘We Rule…’ or ‘The Seer’ since they were released. Considering that ‘We Rule…’ was an entirely home-made affair, it doesn’t actually sound that bad at all. I think the production is pretty nifty, especially the drums. There were a few cringe-inducing moments at certain points when parts were utterly out of key though and I wonder how we let that slipped past at the time.

“We all like the way ‘The Seer’ and [B-side] ‘Traitor’ sound – it’s a bit bassy heavy and boomy, but you can EQ that out at home. Also, we were happier with those songs; the compositions are stronger than on those on the EP. But the band consensus about those old releases and the reissue is overwhelmingly positive, and of course we still play quite a few of these tracks live. Our lyrics have definitely improved though. There’s some toe-curlingly clichéd lines on that EP that we’d never go for now. And I’d say that the songwriting has matured too.”

I asked what springs to mind when he thinks of those releases and Jack replies “the level of improvisation required, especially with ‘We Rule…’, recording the bastard in Jamie’s flat at the time. Who needs an isolation both when you can stick the singer between a couple of clothes horses with blankets draped over them on a kitchen counter. Totally DIY, but it turned out all right though!” Meanwhile, the band hope to record the follow-up to ‘Last Horizon’ next summer. “We’ve written half an album’s worth of new songs that we like and there’s a whole host of riffs and ideas that need refining , but material will be ready soon.”

I ask Jack if there’s anything he’d care to share about the band that others might not know. “Well, the whispering sound effects in ‘Edge Of A Dream’ [on ‘Last Horizon’] that you can hear in the bridge before the solo and at the very end of the track are back-masked recordings of us and producer Chris Fielding whispering the recipe for a garlic bread hotdog invented by Dave, and excerpts from Paul Di’Anno’s autobiography which Chris had brought into the studio to keep us entertained. It reads like it was written by a heavy metal version of Alan Partridge,” he adds.

How would he describe Eliminator in three words? “Handsome; intelligent; liars,” he suggests, and as things are obviously taking a turn down less serious street it’s time for the ‘desert island’ question. So, Jack, if the band were marooned on a desert island, and things got desperate, who would you eat first, and why? “You,” he replies, deadpan. “We’d built a raft, sail to Oxford or wherever the hell it is you guys are based and we’d eat you – not just you, John; all of you over there. We’d eat the bloody lot of you!”

I do hope he’s kidding! 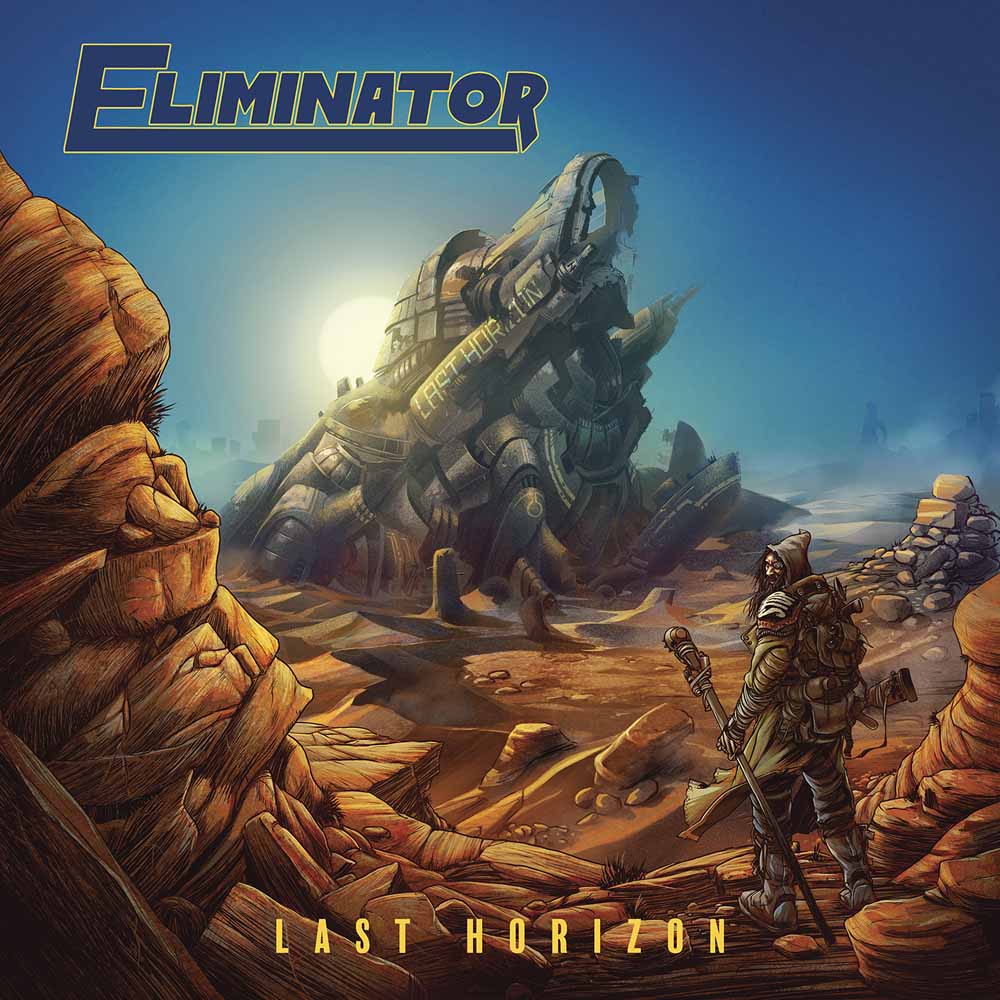 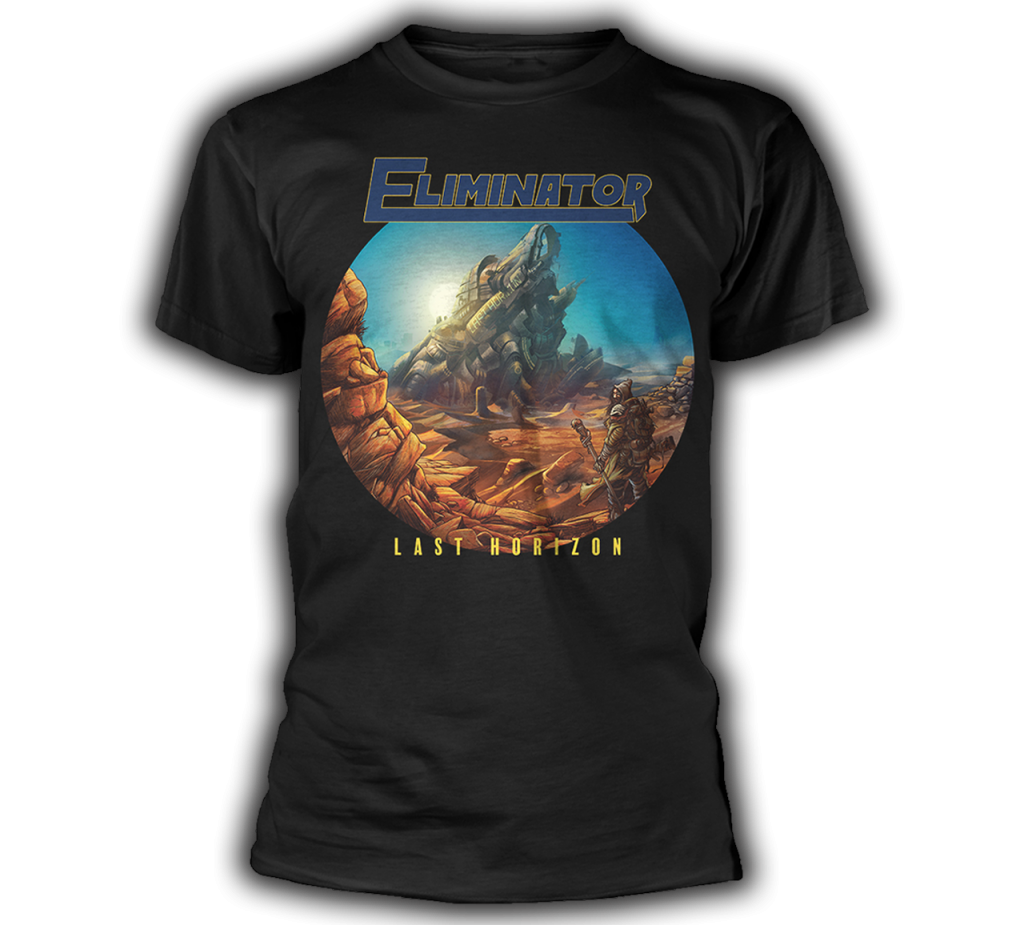