“I didn’t really want to do a lot of shows,” recalls Evo. “I’d done all that with previous bands, and I really wasn’t that interested. But there are three which come to mind. We did the Dynamo, in Holland, and that was absolute chaos from start to finish. I ended up pissing on the audience. Well, I had to go so I pissed in a pint glass and threw it into the audience. We’d been to an abattoir already and got two buckets of pigs’ blood so that went over the crowd next, and then the bass player, Falken, he had a Fender Precision bass, so why he took it on himself to smash the fuck out of it and chuck it into the audience I don’t know. Then, you know, trashing the drum kit… Well, the usual night out with the lads, really! Kerrang! were over for that one and called us “the next Sex Pistols without a doubt,” but we ended up being in all the Dutch newspapers as they were outraged at the antics of the British anarchists  who’d descended on the sleepy town of Eindhoven.

“Then we did the homecoming show in Shildon, which was heaving. It was packed. It still holds the record for the biggest bar take ever. Toy Dolls couldn’t beat it, White Spirit couldn’t beat it, Geordie with Brian Johnson couldn’t beat it. We got the most punters ever in that little club… The only reason we did it was because they needed funds. It was the usual working men’s club, and they were going to close it down. They said ‘you’ve got a big band, haven’t you?’ and I said ‘no, it’s not like a Glenn Miller Big Band but I’ve got a worldwide recording deal and I’ve just come back from London working with Lemmy’, so they asked us to play to help save the club. So I thought, ‘fuck it, why not? We’ll do it.’ So we put a big rig in and had a very enjoyable night.

Saving the best for last, the third – and, Evo reckons, “the best” – gig was when Warfare headlined the London’s Marquee on 15 November 1987. “You know you’ve made it when you go straight to headlining the famous Marquee club. Exhumer from Germany supported us, and I was over the moon to be doing the Marquee; it’s the pinnacle for any rock band. Once you’ve played the Soho Sweatpit you’re a name band. One fan who was there said he couldn’t hear for nine days afterwards. Fucking great! We showcased two tracks from ‘A Conflict Of Hatred’ and also did our cover of ‘Addicted To Love’, which was going to be the next single until Robert Palmer’s people put a block on it.” 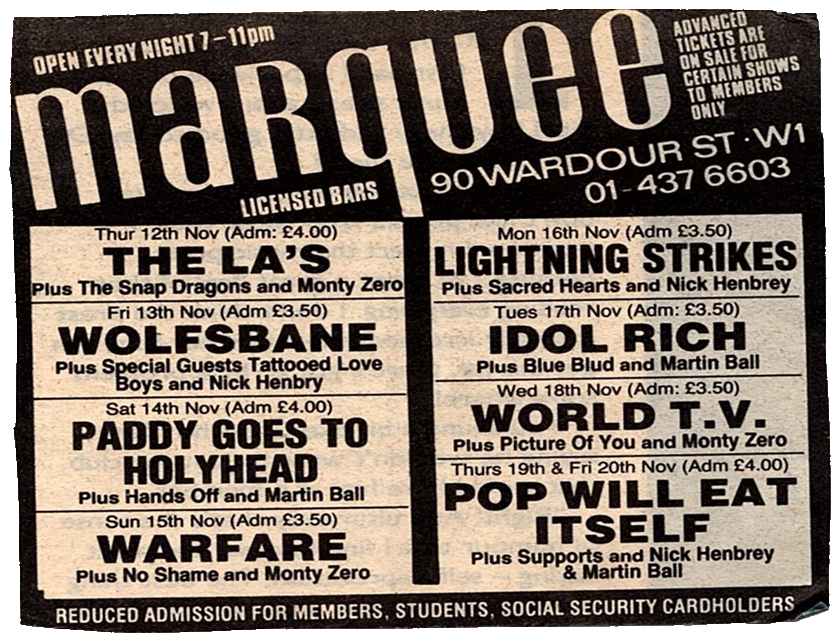 But we’re getting a bit ahead of ourselves here. Roughly a year previously Warfare had been offered the prestigious opening slot at Metallica’s Hammersmith Odeon show on 21 September 1986. But the buy-on fee for the gig was £10,000.

“The guys in Metallica were cool. At their show at the Lyceum  [in London, in December 1984] I got pissed as a rat with James and Lars and watched the show from the side of the stage. So to do a show with Metallica would have been great. But then David [Wood, head of Neat Records] said ‘their management want £10,000, mind.’ Ten grand? That was well out of my league. So I said to David, ‘give me some cash, I’ve got a special idea that’ll sell loads of records.’ Then I went straight round to see my mates who had a fairground, to see about rigging out the back of one of their trucks to look like a World War Two setting. The deal was done, and off to London we went.” Warfare performed an al fresco show from the back of the lorry outside Hammersmith Odeon. It was certainly a spectacle, and attracted a massive crowd on the day, with the Hammersmith flyover being over-run by fans keen to witness the cacophony. Mics were thrown through car windows, and the truck collided with several cars as it was chased by the Odeon security who also put a crowbar through the truck’s window. “It was a gleeful day out!” Evo told the press, but it didn’t go down that well with the locals. It was metal anarchy personified and eventually, of course, the police arrived.

“I got arrested. I was in the police station and the police officer said, ‘oh, my daughter loves Warfare,’ so I took my shirt off, and he said ‘you wouldn’t autograph it, would you?’ So I thought, ‘this is my get-out-of-jail-free ticket’ so I autographed the shirt, passed it over and he said, ‘right: fingerprints.’ I said, ‘you’re not going to do me, are you?’ and he said ‘of course, that’s my job.’ I got fined £360-odd, and the next day it was all over the national papers. The MP Peter Bruinvels called it disgraceful, adding that the people involved in the thrash movement acted like wild animals, and Kerrang! added that ‘by acting like animals Warfare have done this movement  no favours whatsoever’,” Evo laughs. “David advised me to lie low for a while, but our sales went through the roof! Fuck Kerrang!” 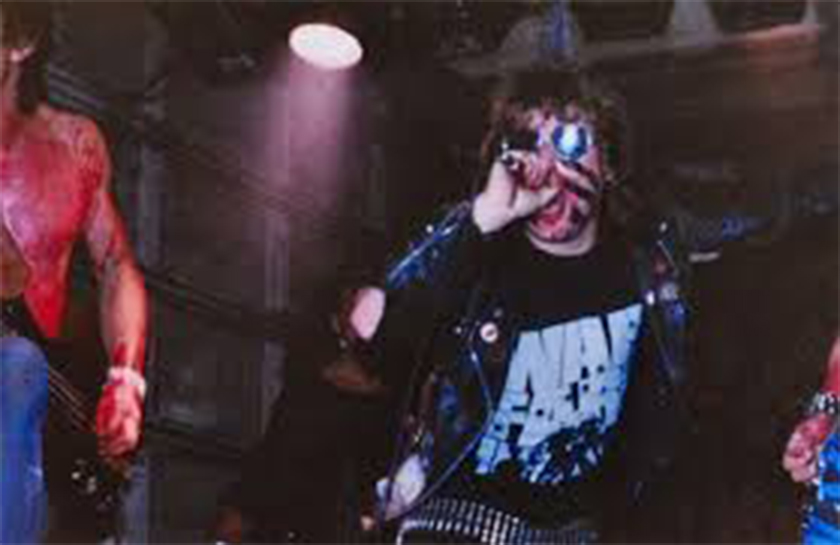 With production on the band’s first two albums handled by Algy Ward and Lemmy, Warfare’s third album ‘Mayhem Fuckin’ Mayhem’ was produced by Cronos. “Our bass player decided he’d had enough. All the songs were written, and I was in the office at Neat one day and Conrad – Cronos – was sitting there having a fag so I asked him if he’d play the bass on the next album. He said to David ‘what do you think?’ and David said, ‘it’s up to you, you’re the bass player’ so he said, ‘aye, go on, fuck it, I’ll play the bass’.”

The album was recorded at Woodlands Studios in Castleford, Yorkshire, and Evo recalls that the sessions were “an absolute ball. We stayed in this little pub and I remember there was a fairground opposite (and I absolutely love fairgrounds) and Conrad was fucking amazing. The man could play anything. We were jamming with him and he could play all sorts: Van Halen, ZZ Top… Anything you wanted to jam, he could jam. Excellent bass player, and an excellent producer too. He just said, ‘I wouldn’t mind doing a bit of producing’ and that was that. I’ve always been very hands-on – this was my creation, and I knew exactly what direction I wanted to go in – but Conrad did a great job.”

Warfare’s final release for Neat was a bit of an eye-opener. Soaking up influences from the likes of Killing Joke Evo contemplated an alternative side to heavy metal. “I’d already added the punk to heavy metal, as it were, the carnage, and I thought there wasn’t much more I could do on the carnage front. But I thought the critics must think we’re just a punk band who can’t do anything else, so I decided to write something totally different, still extremely mayhemic but with a metal alternative feel.”

As such, ‘A Conflict Of Hatred’ was the first Warfare album to take a long time to record. Revelling in solitude and enjoying the space to consider the lyrics and shape the music, Evo recalls that the album was recorded “in bursts at Impulse Studios. When I got an idea, I’d phone to find if the studio was free, get in the car and go up there. I self-produced it, doing bits here and there, and it took weeks to make. But when it came out it knocked the face off everybody! People think that Celtic Frost were the first to put things like saxophones on an album but they weren’t; I was. I detuned the guitars, I had Prelude’s singer, Irene Hume, doing a lot of harmony vocals, I had Marti Craggs from Lindisfarne doing saxophone. The album was twisted, and it was really heavy. And I think it bemused everybody, us going from this three-chord absolutely-in-your-face racket band to something which was extremely different. I listen to the drumming now and I’m not being facetious but it’s actually pretty amazing. And it’s all one take as well. That was well before all those black metal bands were doing that kind of thing. I was always the first with the new ideas. The album had very good sales and the reviews were absolutely amazing, and mystified, to say the very least.”

With more time off and with his characteristic determination Evo came up with his most bizarre idea yet. “Wouldn’t it be wonderful – wonderful – to write a concept album based on the Hammer horror films. So I blagged my way into Elstree Studios, went to the Hammer office completely uninvited and without an appointment, and explained who I was and what my concept was: an album celebrating their films. As luck would have it they were commemorating their fortieth anniversary. I received wonderful letters from both Peter Cushing and Christopher Lee for the future cover art. The problem was though that they wouldn’t license an album from Neat. That’s not how they worked. They said they’d set things up for me and create their own label, so then I had to go back and tell David I was leaving Neat, which broke his heart. He really did like Warfare.” 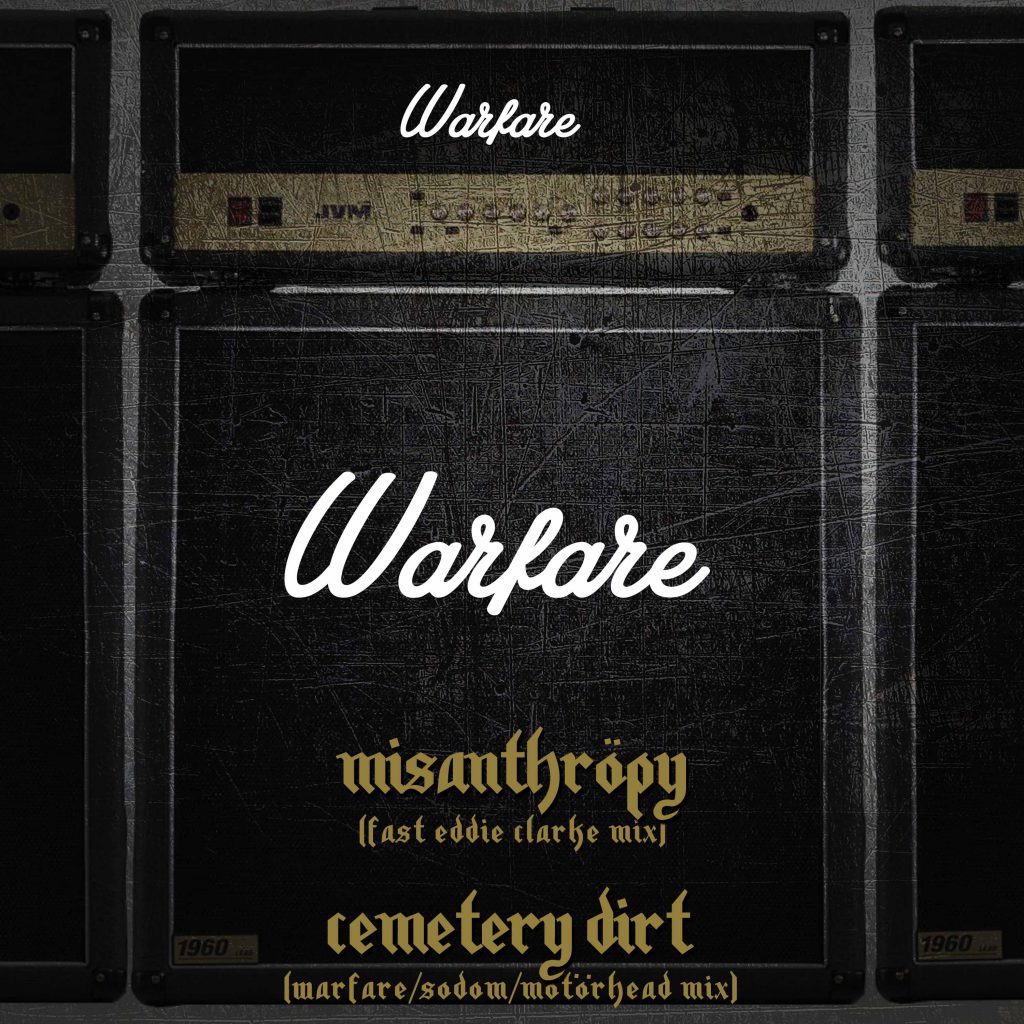 Once ‘Hammer Horror’ was in the shops though, Evo admits that he “started to become very disillusioned with the music business. The last commercially released album that I did was a collaboration with Algy and Wurzel called ‘Warhead’. Although it’s a good album, I’d lost my enthusiasm for it. I just quit and decided to buy my own fairground. As I said, I was fascinated by fairgrounds since I was about three years old, and it’s just like rock and roll. You set up, you entertain, and you take it back down and move on. And so for about twenty-five years I didn’t do anything musically. The phone rang – ‘would I play drums?’, ‘would I produce?’ – but I did nothing. I just turned my back on it.”

However, following an approach from Germany’s High Roller Records in 2016, a chain of events led Evo to Fred Purser’s Trinity Heights studio, playing the bass riff to what would become ‘Misanthropy’. “Unbeknown to me, Fred was taping it. As I was very good friends with Fast Eddie Clarke, I sent him the track and he played on it, and that was that. I just fell back into it, and subsequently after twenty-five years a new album was created, simply called ‘Warfare’.”

The band’s new self-titled album also features Lips, Tom Angelripper and Paul Gray, to name but a few, and is as clear statement as possible that Warfare are back once more. Who knows what might happen next!

To buy or stream any of the original four Warfare albums click on the links below: 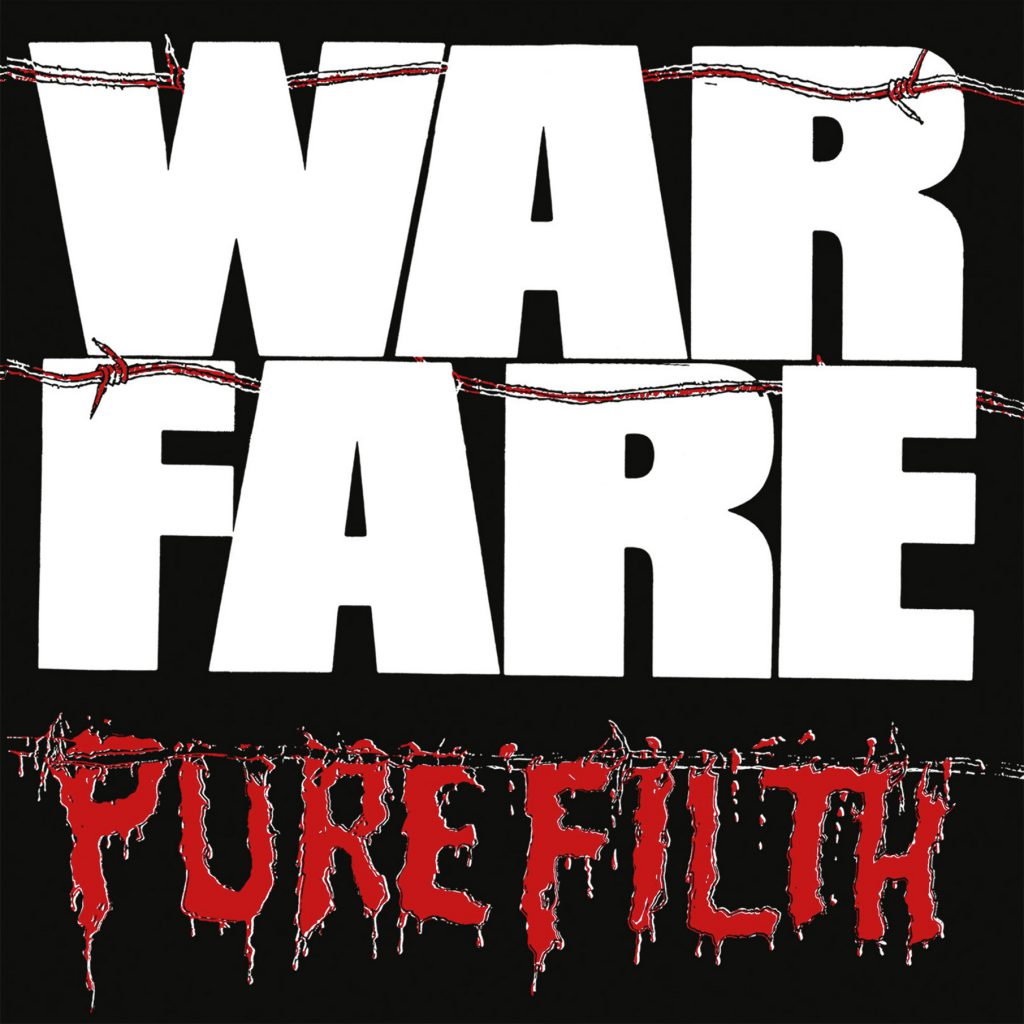 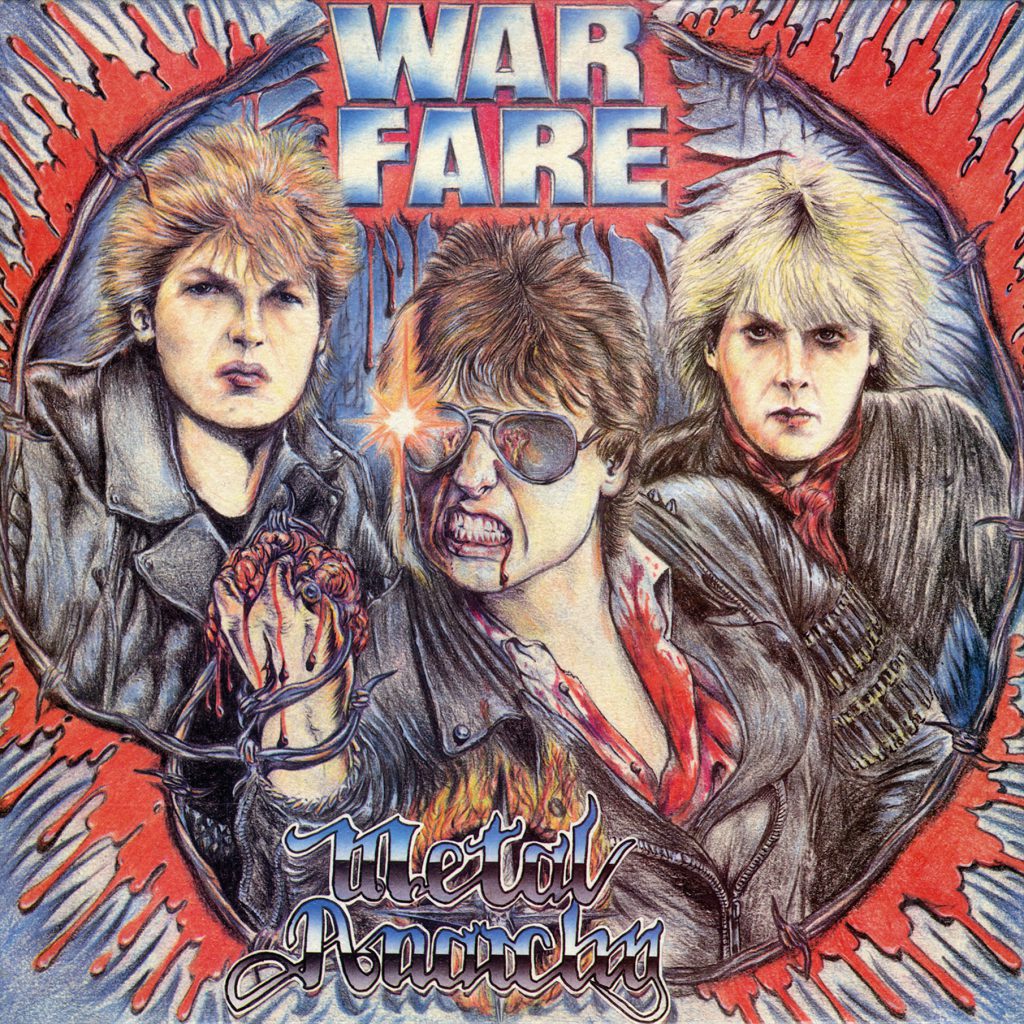 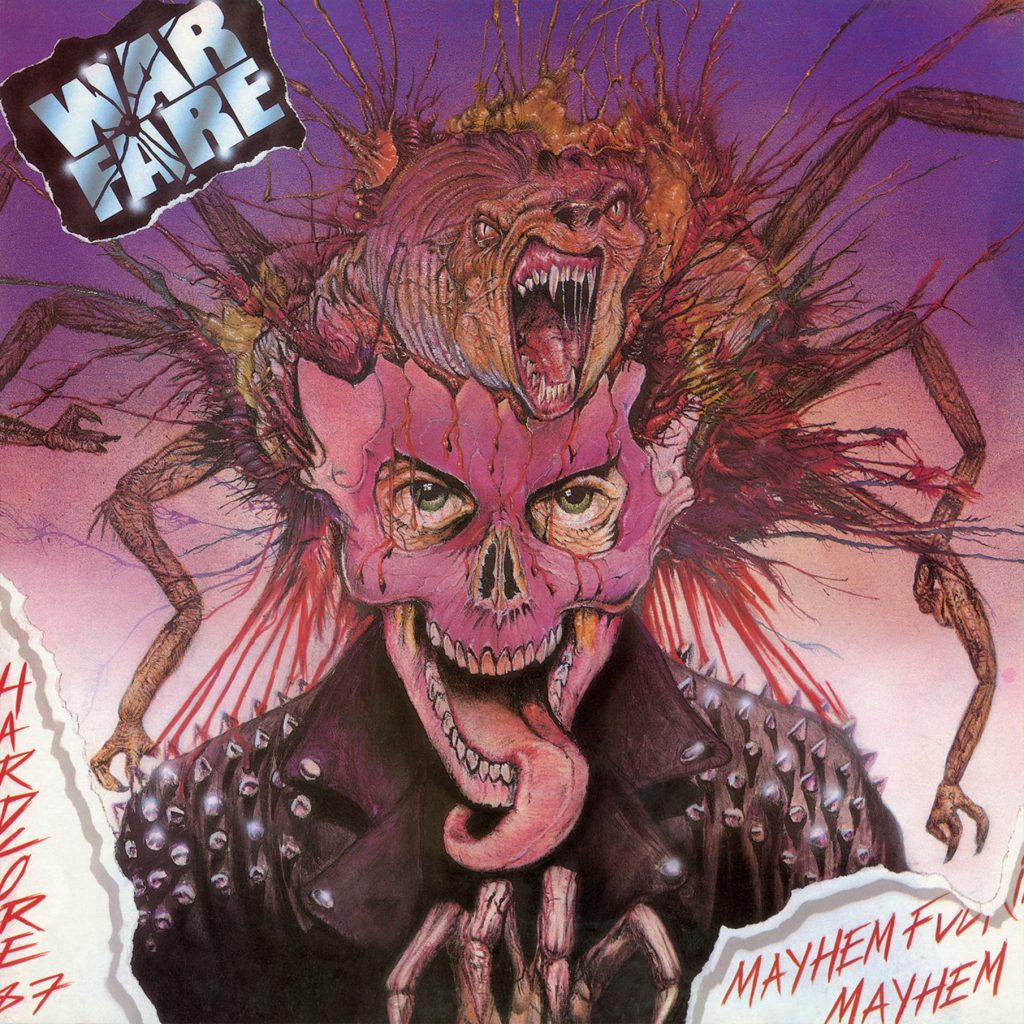 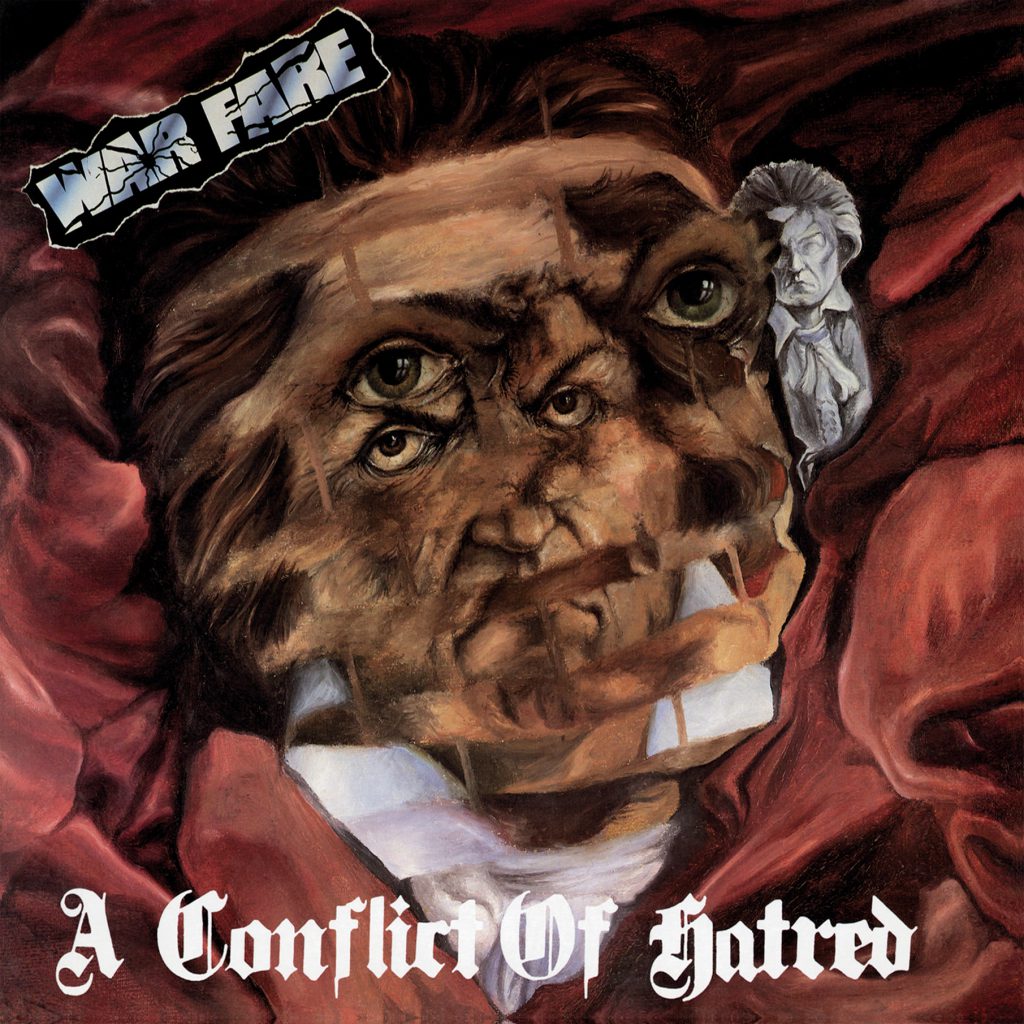 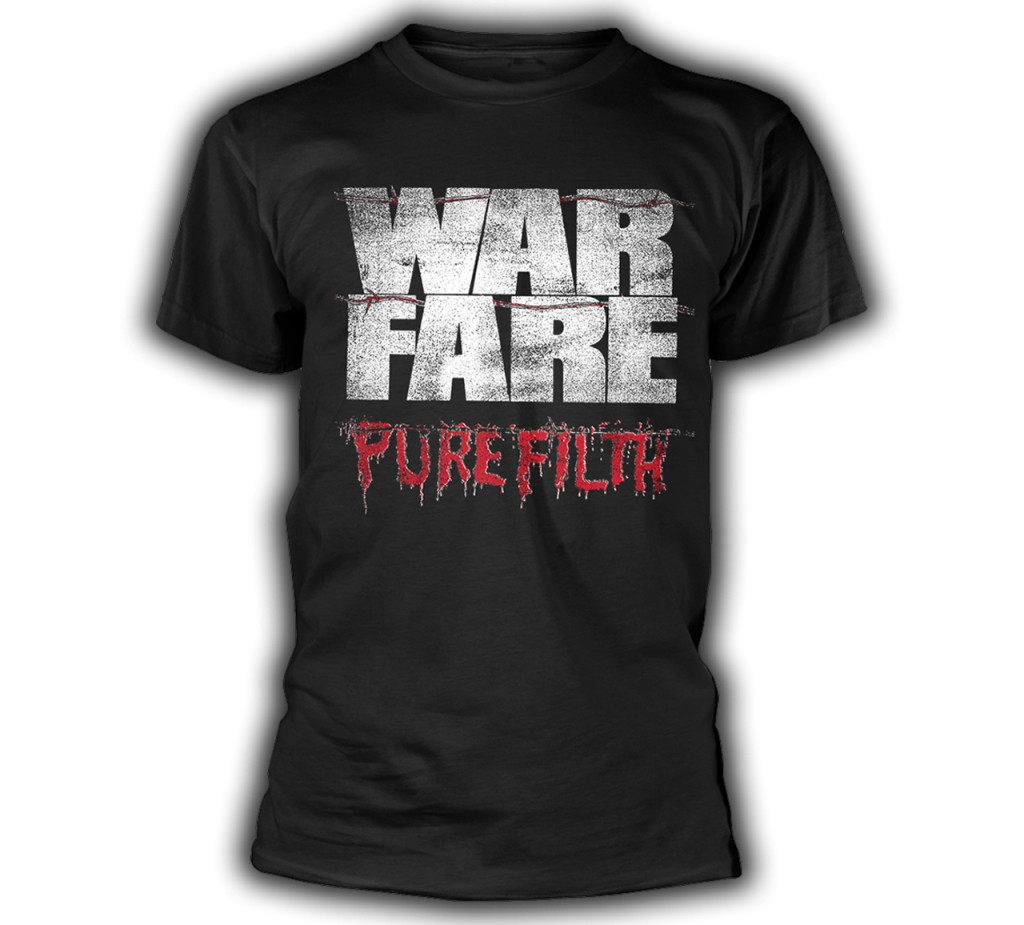 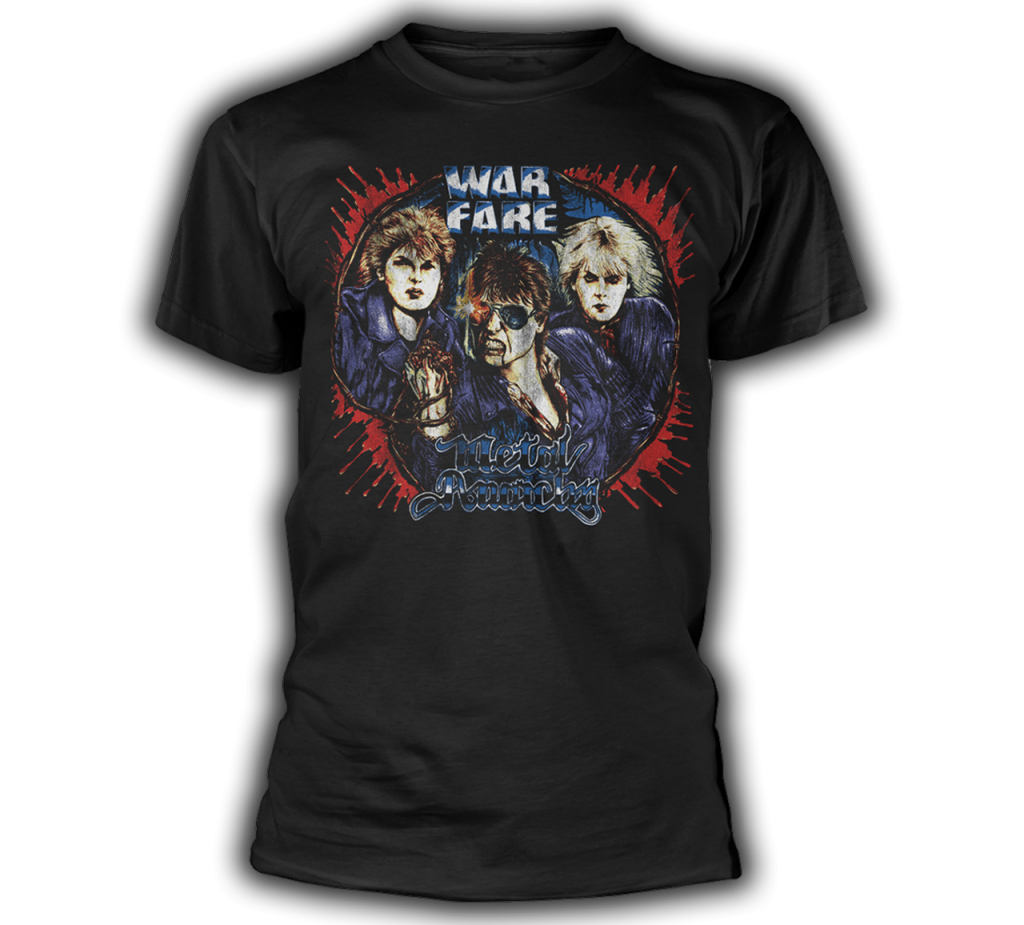 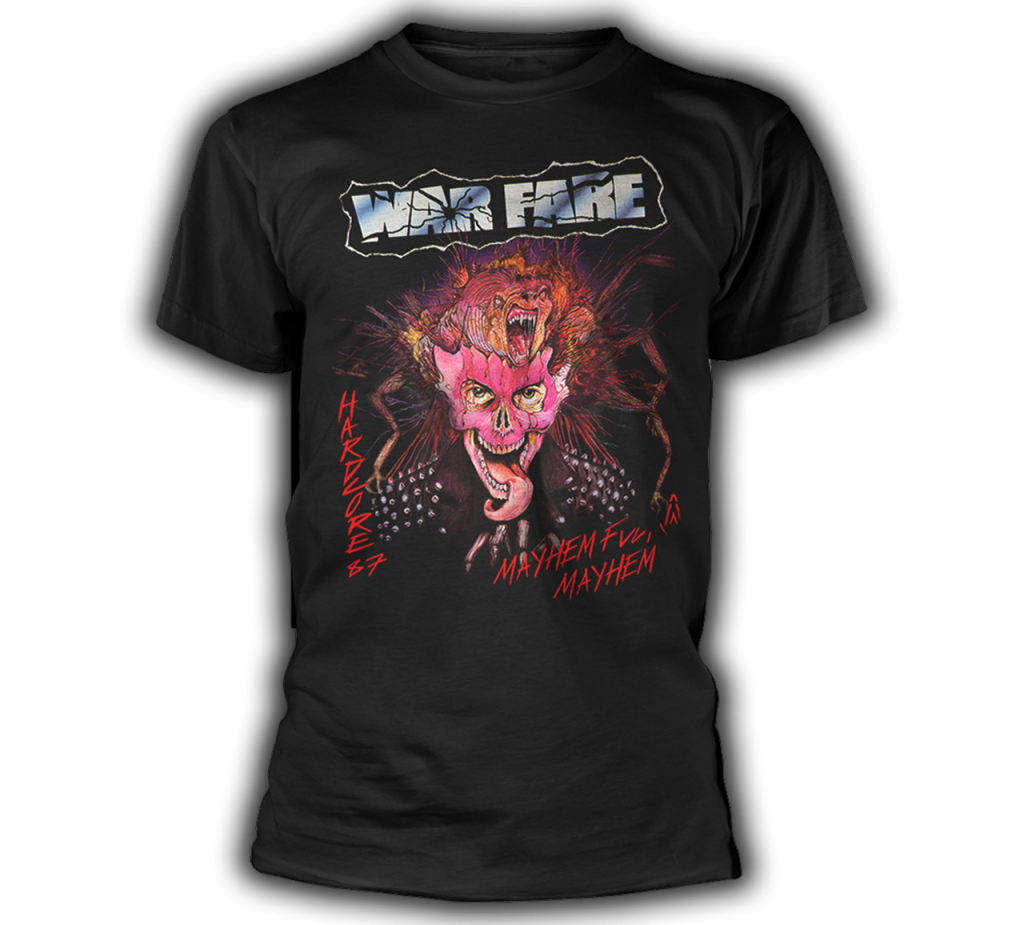 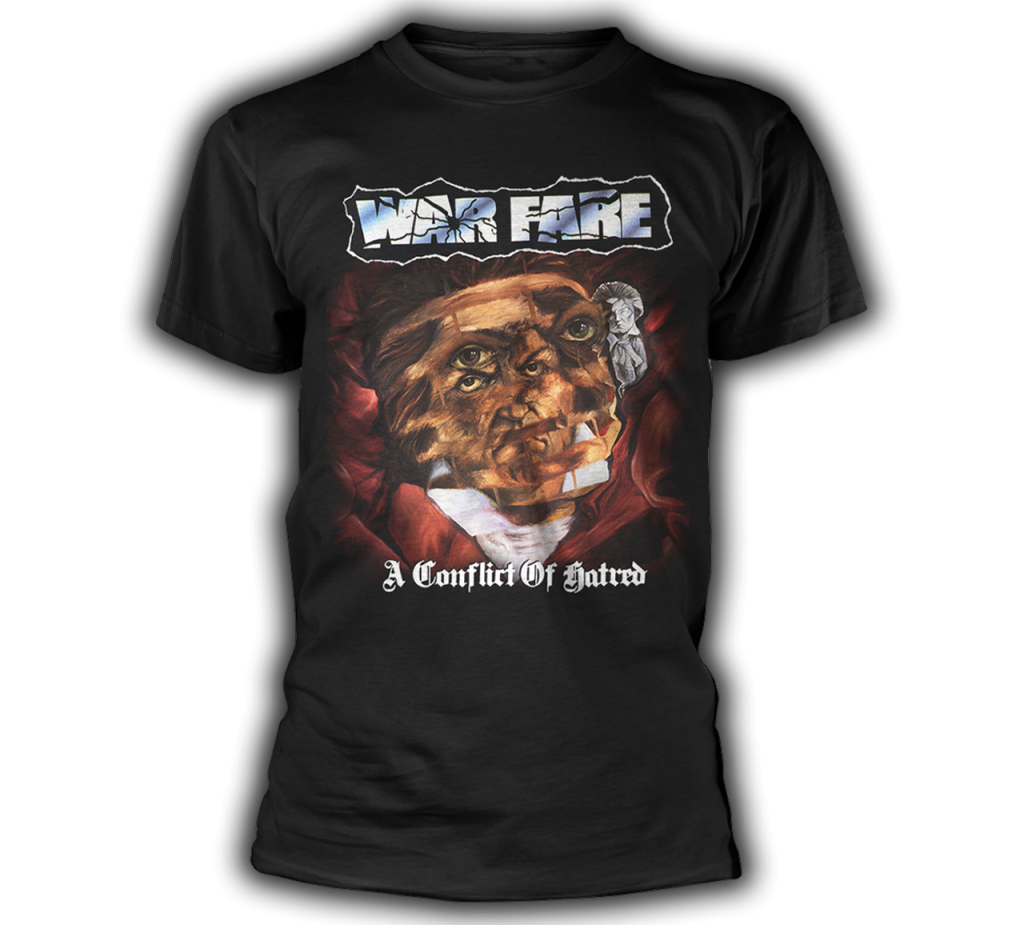