“…The excellent cover art was designed by Claudio Bergamin, the man also responsible for Judas Priest’s ‘Firepower’ design, and the mighty Priest are also the perfect example for a comparison to Primitai’s sound, along with the unmistakable Iron Maiden, Saxon, et al twin guitar references. Eschewing the routine, high-tempo power metal route, Primitai are firmly rooted in the more traditional NWOBHM/classic heavy metal style yet succeed in dragging the genre into the present day with modern production techniques. Yes, there is the occasional brief foray into power metal and even thrash territory, along with a definite progressive edge throughout the excellent arrangements of the nine full songs on offer, but most importantly, Primitai never lose sight of the crucial element – that the melody is king – and that is ultimately where their strength lies.”

– Review of ‘The Calling’ by Ant Heeks, Fireworks 83

There’s little doubt that Ant Heeks’ review of Primtai’s fifth album – their first for Dissonance – really hits the nail on the proverbial. “It is the most progressive album we’ve done, and it is experimental for Primitai,” confirms guitarist Srdjan Bilić. “The songs are generally longer with less straightforward arrangements, different time signatures, there’s synths for the first time, some quite ambient instrumental sections; but we’ve made sure there’s still plenty of catchy hooks and no-nonsense heavy metal to keep the album flowing.

“I think,” he continues, “that one of our strengths is that our style of music is rooted in the timelessness of classic heavy metal, but with relatively wide horizons. We’re never going to forget the ingredients that made Judas Priest and Iron Maiden so great, but at the same time we’re happy to use today’s sounds and influences from whichever genre of music we like. This helps us transcend subgenres, and it’s allowed us to play with bands from Sepultura to Reckless Love to Edguy, and win over large portions of those bands’ crowds on the night.”

While some of the reviews for ‘The Calling’ have made Primitai look like an overnight sensation, like most overnight sensations they’ve got their fair share of blood, sweat and tears behind them. Srdjan is more than happy to quickly romp through the band’s back story. “The origins go back to the mid-2000s when two Sandhurst lads Nick Saxby (lead guitar) and Graham Christie (vocals and rhythm guitar) started jamming in a garage, and gradually this evolved into Primitai. From 2007 the band settled with Jamie [Lordcastle] and Chris [Chilcott] on bass and drums and released ‘Through The Gates Of Hell’. In 2009 Graham vacated the singer/rhythm guitar spot and through mutual friends Guy [Miller] became the vocalist and I joined as guitarist. From then on things started accelerating. We won £5,000 in a national Battle Of The Bands competition and invested this into recording ‘The Line Of Fire’ which we released in 2010, and a tour with LA’s White Wizzard who were rising stars at the time was our first real break. One thing kept leading to another, with subsequent appearances at High Voltage, Bloodstock (two years in a row), and Hard Rock Hell amongst others. With Tom Draper taking over from Nick we released ‘Rise Again’ in 2013. We had a good run with that album, supporting the likes of Saxon, Sepultura and Grand Magus. Then came the bands biggest test: Tom had to move to the States, and we needed to find a new guitarist. We were very lucky to have the incredibly talented Sergio Pedro Girón come out of nowhere from an online ad to join us.”

However, just when things looked settled Jamie and Chris decided to leave music altogether. “So Guy, Sergio and I took 2015 out to rebuild the band,” recalls Srdjan, “and record ‘Night Brings Insanity’ [released in May 2016] and just before the release we cemented our new line-up with drummer Jonathan Warren and bassist Scott Miller. Starting with an awesome comeback show in May 2016 at the Black Heart, it’s been an upward trend ever since, culminating in signing with Dissonance and releasing ‘The Calling’ in May 2018. In the last few years we’ve really enjoyed connecting with other bands leading the charge in the UK, many of whom also went on to join Dissonance, as well as independently booking ourselves onto shows with some real heavy metal legends.” 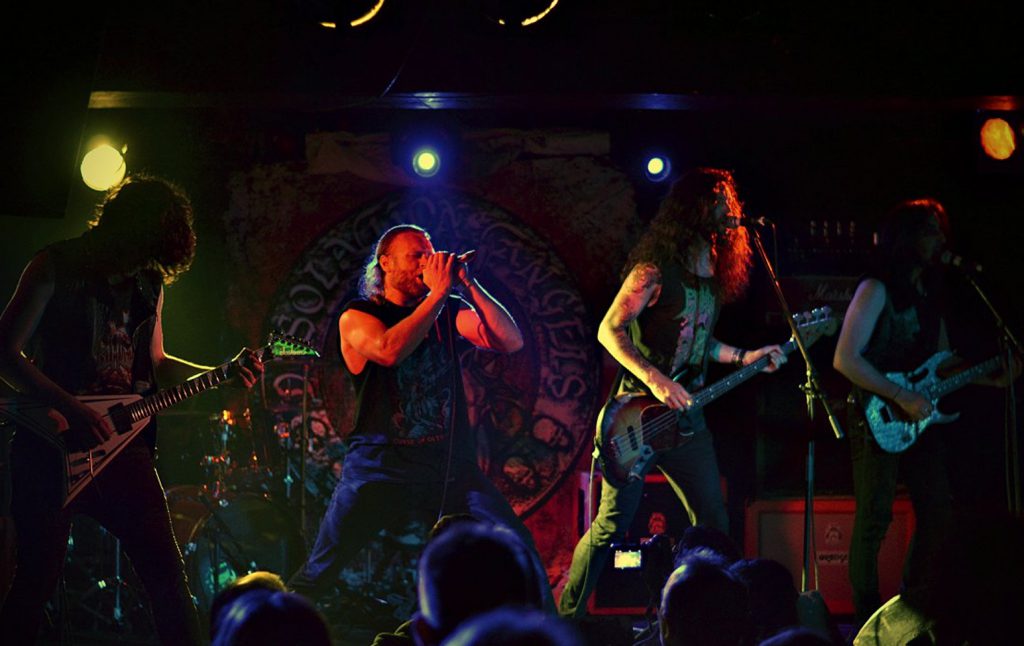 As ‘The Calling’ has been out for almost a year now, I wondered if the band were still happy with it. “We are indeed still very happy with it,” comes a very affirmative response. “The reviews and interviews keep coming in so we’re constantly getting reminded of the mostly” – he laughs – “positive impression it seems to be making on people. And the press are posting their top albums of 2018 at this time of year and it’s pleasing to see us make a fair few of those shortlists alongside some very esteemed bands. I think ‘The Calling’ features all the best playing every band member has ever done. Sergio and I pushed ourselves to the limits of our abilities in the solos. Guy was reaching new levels singing-wise, and Scott and Jonny made the bass and drums the most integrated they’ve ever been as well as being complementary to the rest of the music. I think the band has never sounded this much like a unit before. We wanted to write the best songs we could, but also it was important to make sure everyone had a fair share in terms of their contribution to the music, to ensure everyone felt involved. It’s really important that everyone in the band enjoys it. There’s so much time, effort and money put into this that it needs to make you happy in the long run. We have a lot of creative minds in this band, and we never want anyone to feel like they’re being elbowed out of the way. It’s important to have a healthy working relationship and we have relatively little band politics-related dramas – and when we do it’s mainly trivial things like what songs to put in the set when we’ve only got thirty minutes!”

‘The Calling’ features an eye-catching cover (which perfectly matches the band’s attention-grabbing music) courtesy of man-of-the-hour Claudio Bergamin. “We did some research on artists and our number one choice came to be Claudio. He’s got the perfect balance between the hand-drawn style and a razor-sharp finish – if you get the balance wrong you could end up with something too DIY, or too clinical and soulless. We reached out to Claudio and we’re grateful he agreed to work with us despite being incredibly busy with the release of Judas Priest’s ‘Firepower’. We’re very happy with the result.”

2019, according to the guitarist, is a year of “focussing on playing live and taking our show to as many places we can as possible. ‘The Calling’ has a lot of life in it yet and there’s plenty more gigs to play with it.” So far confirmed are a clutch of dates in March supporting Wolf together with a number of festivals, including the eclectic Amplified festival in Gloucestershire in July. “And of course we’ll gradually start pulling together new musical ideas so we have some songs ready for when ‘The Calling’ does run its course.”

Wrapping things up, I ask Srdjan for some trivia about Primitai – something the average fan might not know about the band. “Scott and Jonathan were in an indie/folk band called Dry The River who played the main stages at Glastonbury and Reading, before joining us to play loud heavy metal in small dive clubs!” he laughs. “Sergio was a session musician back in Spain playing indigenous pop music at clubs and fiestas. I’m guilty of working in the likes of Madonna, Jermaine Stewart and Chaka Khan into my heavy metal covers band’s set. And Guy cut his teeth touring in a ska band, wearing a tuxedo on stage!”

Blimey! Well, that a surprise! And if the band were marooned on a desert island, and things got desperate, who would you eat first, and why? “Sergio,” he replies, barely batting an eyelid. “I guess he’d probably taste of chorizo! Sorry Sergio,” he adds as an aside, “it just crossed my mind and I can’t stop laughing about it now!”

To buy or stream ‘The Calling’, click the link below 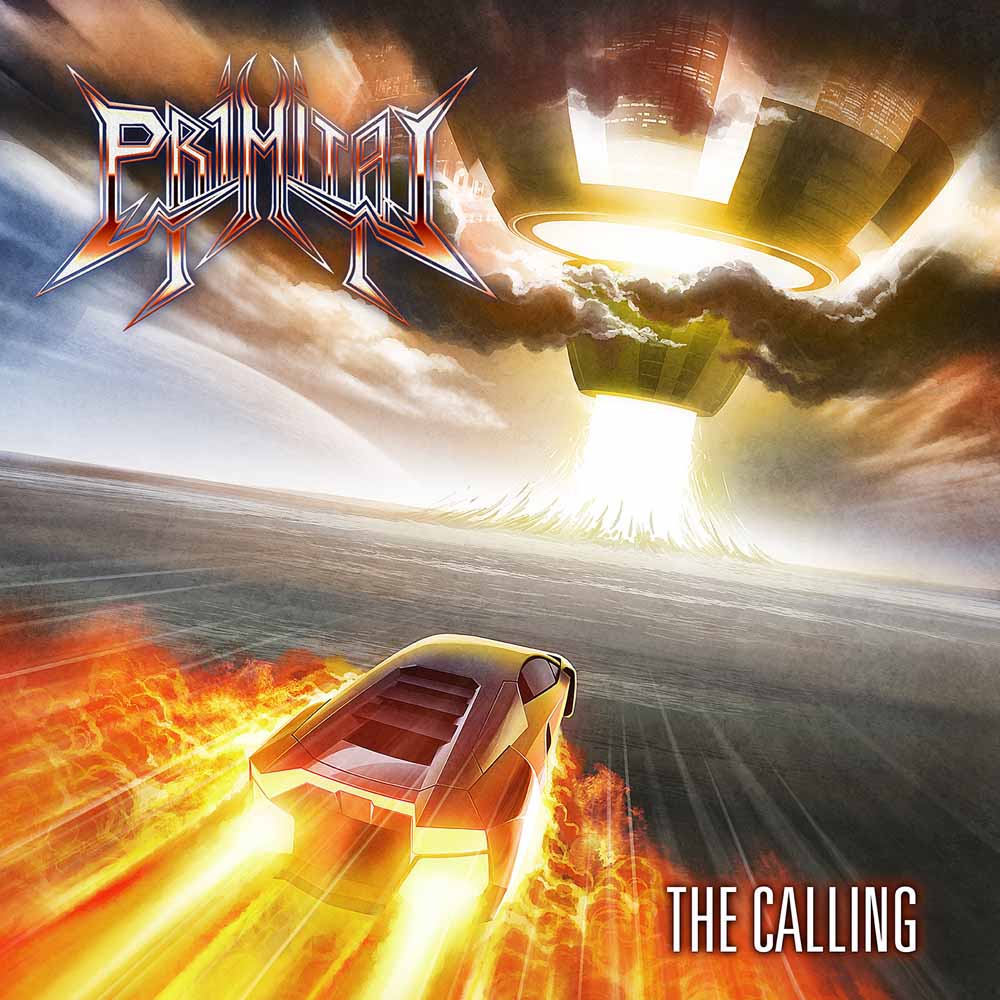