Desolation Angels were one of the hardest-working bands of the New Wave Of British Heavy Metal. Formed in 1981 by guitarists Robin Brancher and Keith Sharp – both from Blackwater Fever – a well-received single ‘Valhalla’ and self-titled album earned them considerable respect, and even as traditional metal gave way to thrash, and thrash to grunge, the band continued to struggle against a rising tide of apathy until bowing to the inevitable in the early Nineties. At least they’d made a stand though and in doing so had created both a name for themselves and a legacy which became the catalyst for the band’s reformation.

The actual impetus to reform Desolation Angels came from an approach “sometime around 2009/2010” by Richard Walker who was looking to re-release the band’s 1986 self-titled debut album through his then label The Miskatonic Foundation.

“Ah, our debut album,” begins Robin. “As you’ll probably be aware, that album is the bane of Keith’s and my life, and it raises its ugly head everywhere that Keith and I travel across the globe. As the years have rolled by, it’s turned into something everybody hails as some sort of masterpiece – which is truly a fitting turn-around considering the colossal hassle it gave us at the time.

“It was recorded in the most difficult of situations, not just in the way that Thameside chose to record it, but also in the way that we had been bumped around from record label to record label. Stress levels were already high for such a young age, and to make matters worse, this was our first big-time recording under contract, and although the guys at Thameside Records were cool and accommodating, they didn’t know what the hell they were doing when it came to recording a heavy rock band like ours! Even though we had done recordings before this – the ‘Valhalla’/’Boadicea’ single to name just one such classic – we were pretty naïve with regard to how you work in a recording studio. So the whole project was doomed from the start really. What with the horrendous production, and the lack of musical ability back then, it really did suffer. In our defence though, Keith and I knew we had the riffs and the idea of songs, and so we progressed.”

Personally, I feel Rob might be being a tad harsh on ‘Desolation Angels’, but anyway…

“So in answer to Richard’s question, the pair of us decided it was a resolute ‘no!’. But, not wanting to lose the deal, what we did suggest to him was that we should do a box set, a bloody great big four-CD box set to include everything we’d recorded to date. Old demos, showcase recordings, recordings off the mixing desk from various gigs, rehearsal recording, and of course our ‘Whilst The Flame Still Burns’ second album which we recorded in Burbank, California. It just seemed such a better package than just rehashing the same old album again. But even trying to do this came with its pitfalls. Obviously, one album is a lot easier to finance than four. But eventually we got our way and got the best out there, and the ‘Feels Like Thunder’ box set gave all that material that Keith and I had stacked up over the years a breath of life.

“With the release of ‘Feels Like Thunder’ came the offers of shows, questions were asked of us, interviews came, and slowly the whole circus that goes with being in a rock ‘n’ roll band started up again. Not that Keith I had a band at the time; far from it actually. What we actually wanted to do was put a kind of full-stop on where we were at with Desolation Angels. We didn’t really realise that promoters, fans and record labels would show that much interest. But they did. So we thought, why not? Let’s give it a go. Let’s see where it takes us this time around.” 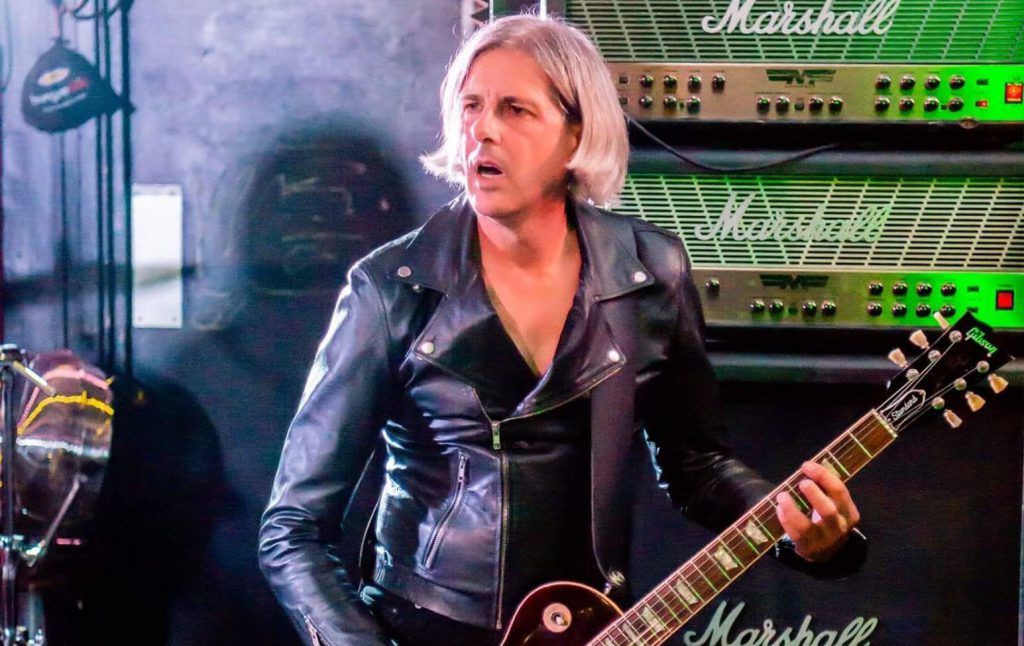 But as Rob has pointed out, Desolation Angels didn’t actually exist as a band any more, and so he and Keith had to build a new band from scratch. Firstly though, the pair had to re-appraise their own relationship.

“Well, to start with, we just talked through the possibility of getting a band together. In the past, we’d had some differences of opinion, to say the least! These differences would sometimes lead to arguments and then to fights. So, being honest, we needed to be sure with each other about certain band criteria before igniting the blue touch paper to fire up Desolation Angels again.

“So at first it was just the two of us jamming through the old and new material at Keith’s studio in Hereford, just to see how we were with each other again after such a long time apart. As it turned out, it was all rather cool, and the chemistry of old was as immense as it had always been, so with the help of some epic visits to our favourite watering hole, the Bunch Of Carrots, for food and refreshments, the jam sessions continued to go very well. We could both feel the energy and excitement in everything we played to each other, whether those tunes were old or new. The power had never left and we proceeded as if it was yesterday, and that there had never been a sixteen-year gap.

“At the time I was working for an advertising agency called Abbott Mead Vickers BBDO, and in their design department was a chap called Neil Craddock, a bass player. I talked with him about our band and the reformation. The next thing we were jamming together. Then along came a drummer, and then, through an advertisement – where and how escapes my memory, I’m afraid – Curly [Ian ‘Curly’ Davies] joined, and the Desolation Angels reincarnation Mk1 was ready to gig. I should have mentioned that we did ask former bassist Dave Scutt if he wanted to re-join the band first, but sadly he was involved with other commitments.

“This line-up went on to do two gigs, one at the now-defunct Bull & Gate in Kentish Town in London, and another at the Hammer Of Doom festival in Germany. Both of these were really well received, as comebacks go,” he smiles, “but Neil left after the German gig (for family reasons) and so we filled his place with Clive Pearson who also brought along drummer Chris Takka, and so we continued as Mk2 Desolation Angels.

“We did some great gigs with Curly, and had a lot of laughs too. Personally, I liked Curly’s high-range vocals. His tone was very much in the Rob Halford league, which is saying something, and also he was a master at working and getting the crowd on the band’s side. A skilled showman indeed!”

This line-up was responsible for what Rob calls “a very competent five-track EP” entitled ‘Sweeter The Meat’, released in July 2014.

“‘Sweeter The Meat’ still does it for me,” he admits. “To be quite frank, for a pretty low budget recording, it bloody well rocks! It was recorded – thanks to Curly who was studying in the city at the time – in Coventry, at the university there, with Shaun Lindsley doing a blinding job at the controls too. It was a learning curve, as these things always are. Every time that you step into a recording studio it will always come with a full-on set of new experiences.

“The cover went tits-up a bit though. As I didn’t have time to get test prints before it went press – a lesson learned there! – everything is a bit too dark, and some of the overall details and intricacies have been lost. The cover depicts the bombed-out Coventry cathedral, with Hell’s fires burning all around: quite apt really. In between breaks in the recording, we would walk over to the ruins. Standing on the flagstones looking up at what’s left of the old cathedral was a totally awe-inspiring experience.

“The EP was received well in the press. Well, when I say ‘press’, I mean more the underground press that bands of our stature are known through these days. Without their commitment, thank heavens, nobody would know that bands like us, and many others, are still going! God forbid if any of us get reviewed by the mainstream papers, magazines or radio stations. They would hate the fact that we could blow away a huge proportion of the crap that they are forced to review and advertise. Complete big music industry control, hypocrisy and force-fed manipulation of what they think you should be listening to and buying… It totally pisses me off! Okay, rant over,” he apologises. “Anyway, in our live set at the moment, we still play ‘Archangel’ and the title track from ‘Sweeter The Meat’ – a couple of balls-out rockers to end an evening of full-on head bashing, and those reviews made us think about doing a full album.” 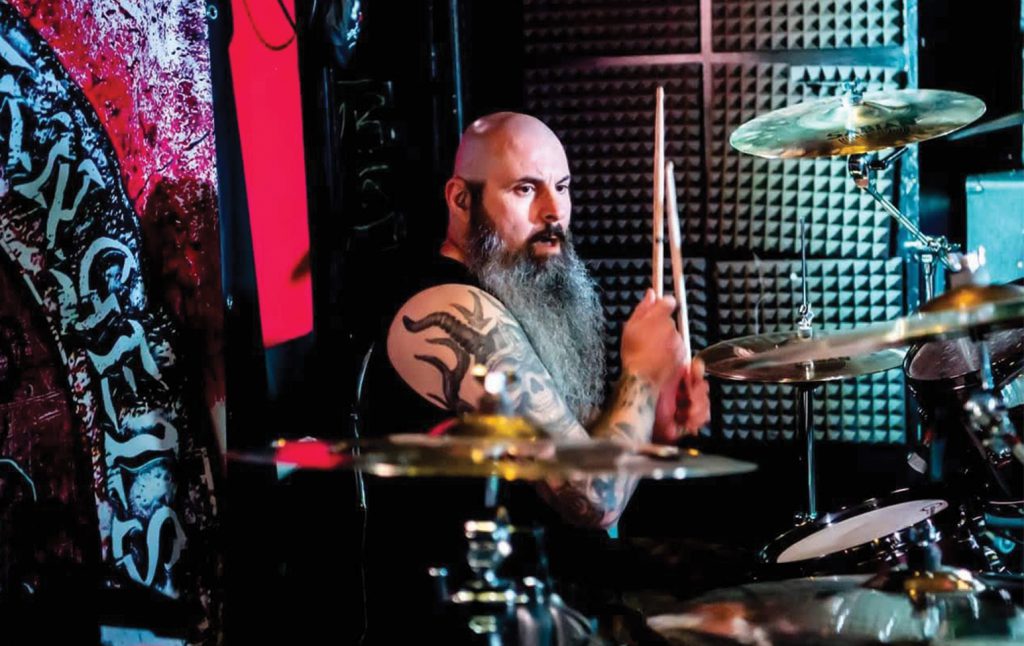 Unfortunately, before the band could record anything else Curly left the band. “He wanted to do other things with his talent,” shrugs Rob, “and he wanted to be paid for that talent, too. I can’t blame him for that, and quite honestly he has a very valid point. This industry is a bloody nightmare when it comes to actually getting paid for original creativity. All along the line everybody else in the production process seemed to be bringing in a wage from our efforts – our efforts in making money for someone else, and that same effort not making a penny for the originators! So, yes, I can see why Curly left!” His replacement was Paul Taylor who, as a member of Elixir would have crossed paths with the fellow Londoners in Desolation Angels from time to time.

“I remember Elixir from back in the day,” Rob recalls, “and obviously knew Paul as their singer. But although we met quite a lot on the gigging circuit, and both bands knew of each other’s existence, there isn’t always time to talk. Each band is doing its own thing, and moving on. It’s more like ships in the night, you pass one another along the way, so I never got to know him properly until now.

“However, we were playing at the Kevin and Julie Riddles’ Wed-Fest Rocka 2, where Kevin [the driving force and monumental bassist in Tytan] got up with us and, completely unrehearsed, we did a storming rendition of ‘Valhalla’. I think Kevin had had a good few drinks by the time he got on stage with us, and you’ve got to give credit as to how he (and we!) got through the song. It was near faultless on his part; an amazing standard of musicianship.

“Anyway, sometime after, and somewhere in the middle of after-gig ales ’n’ spirits, Paul managed to catch Keith and me in-between refills and advised us that should Curly ever leave the band he would like to be considered as the replacement for that vocal spot. Whether we played just darn-right overwhelmingly magnificently that night, and Paul thought ‘wow, I should get myself in with these guys,’ or whether he knew that Midnight Messiah [the band Elixir sort of morphed into] were living on borrowed time, I don’t know. What I can say though is, once Curly upped and left, and after some to-ing and fro-ing searching for the right singer, we realised that Paul was our man, and this line-up became what we are today, Desolation Angels Mk3 revisited.”

Next month Rob brings the story up to date with the release of ‘King’.

To buy or stream the band’s latest album, please click on the link below