With a new contract with Dissonance and a new album ready to roll, it’s no wonder the members of Barbe-Q-Barbies are very happy with life right now. “With this album we were not afraid to be ‘us’ in every way,” says vocalist Niki, as effervescent as a bottle of bubbly. “That’s pretty much the strength of it. You know, we weren’t afraid if the melody wasn’t ‘rock’ enough for the album. As we were writing songs we just went with the flow. Hopefully our fans, old and new as well, will like it. We are proud of what we have accomplished with the album, and I am also very proud that as a band we’ve stuck together this long and are already planning our fifth album even though the fourth one isn’t released yet!”

The Finish five-piece dates back to the early years of the twenty-first century, and as Niki suggested already have three albums under their belts – ‘All Over You’ (2010), ‘Breaking All The Rules’ (2013) and ‘Driven’ (2015). Lining up alongside Niki are drummer Niina , rhythm guitarist Ekkis, bassist Minttu and latest recruit and lead guitarist Heidi. It’s Ekkis who’s happy to rise to the ‘five minute history of the band’ challenge. “We started this band, drummer Niina and I, back in 2002. We actually met at Gearfest at local rock club Tavastia and decided on that evening that we want to start a rock band.” 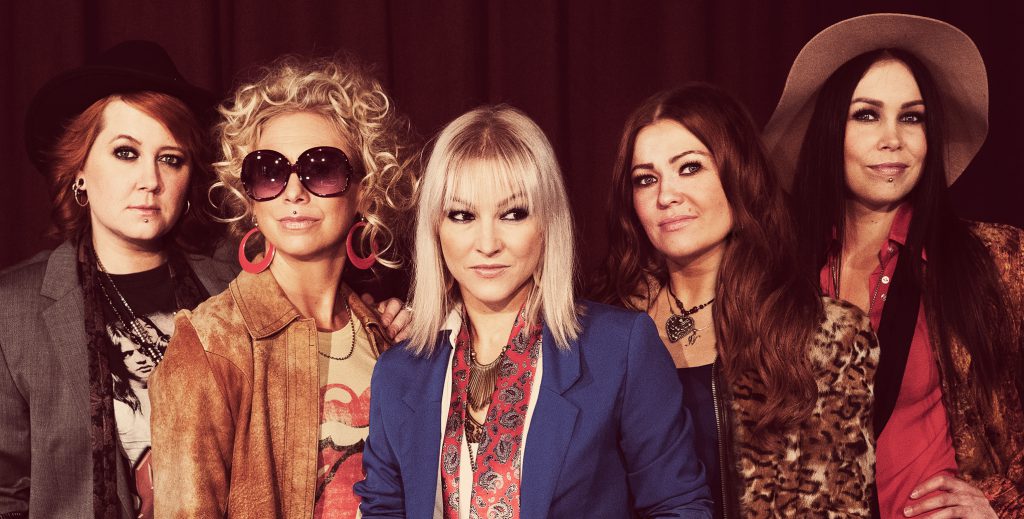 “I saw Niki on a stage at Tavastia doing her solo gig and I decided there and then that she’d be the singer of Barbe-Q-Barbies before even asking her,” interjects Niina. “Didn’t know her before. I just made my decision on the spot and here we are!”

“We’ve released three albums so far and the fourth one will be out in May,” Ekkis continues. “We’ve done hundreds of shows in our country and outside of Finland too. In that time the biggest change and challenge for the band has been when Heidi replaced our original lead guitarist Kaisa in 2017. But it all worked out smoothly and Heidi has brought a new level of devotion and excitement to our team.”

The band famously took their name from a music video. “That was my idea,” says Niina. “I came up with the name from watching Soundgarden’s ‘Black Hole Sun’ video. In one scene there’s a little girl grilling a Barbie doll. So I suggested the name and everybody was into it.” Everybody? “Well, on second thoughts, we could have maybe thought this through a little more carefully,” suggests Ekkis, “but at that time it sounded alright though, and it is fun.”

As mentioned above, the band recently signed with Dissonance and their fourth album ‘Borrowed Time’ will be released in May. “We are absolutely ecstatic about this album,” says Niki. “We’ve been working hard for years to find our ‘inner self’ and I feel we’ve finally got to the point where our music sounds like us. But then again we’ve never had a certain vision, we’ve just been writing songs without thinking about the genre and this album probably shows it in a way. The songs are not just pure rock.”

“I think we decided to really focus on the songs rather than getting hooked on rock clichés,” adds Ekkis. “Not that we haven’t had different kinds of songs on previous albums, but in addition to the ‘traditional rock sound’ we’ve also added strong pop and even funk elements. It’s kind of crazy at times, I have to say, but we’re all very pleased with the way it’s turned out. The title of the album comes from the song of the same name, by the way. It sounded as good a name as any other, and this song is our favourite from the album – great fun to play live!”

“To be honest,” says Niki, “when I write a song I don’t plan how it will fit the actual album. I just write whatever pops in my head. We wrote tons of songs during the last three years since our last record, and at home I write almost every day without thinking of a specific genre. I just love singing and playing with melodies, so we did have some problems deciding which songs to choose for this album – being a band of five we had to do some voting! But the good news is, we already have lot of songs for the next album,” she laughs.

I wondered how the album differed from the band’s previous releases. “Well, every record differs from its predecessors,” says Ekkis, “which is quite normal as a band develops. However, the passing of time, influences, and your own personal development and ambition sort of drive you to constant change. As we’ve said, our new album will probably surprise anyone who’s expecting a traditional hard rock album. We’d got a lot of demo recordings in the early stages of the album, and when we worked on them we decided not to force them into a stereotypical rock format. Our goal was to make the best songs from the best demos and ideas, and I think we succeeded with that.”

“And a change in the line-up is a big change for a band,” chips in Niki. “In our case it helped take things to the next level. I’ve been so amazed by Heidi as she has really raised the bar for us all.”

“The key strengths of this album are versatile songs as well as a good feeling that we hope to pass on to the listeners,” concludes Ekkis.

“After all, this is a privilege!” adds Ekkis. “To play with such a great friends. To share all those good – and, let’s be honest, bad – moments at gigs, backstage and in the rehearsal space. And the moment you’ve learned something new as a guitarist, you realise that this is exactly why you do it in the first place.”

Time for some trivia – is there anything the band can think of that the average fan wouldn’t know. Ekkis thinks for a moment. “The video for ‘Spell’ was filmed in one take. Of course, we had to do it like 150 times before we pulled it off though!”

And as everyone else gets the Desert Island question, I see no reason why Dissonance’s latest signings shouldn’t be excused. So, if the band were marooned on a desert island, and things got desperate, who would you eat first, and why… Niki laughs: “I’d eat Minttu’s butt, because it’s so good looking!”

“If we were the only ones on this desolate island and there wouldn’t be any other alternative I think I would probably have to eat Minttu first too. She’s the only one who has a full vegetarian diet, so she probably wouldn’t want to eat us. On the other hand, she’s probably the only hope for us to survive, so it’s a tricky question. Luckily, it’s not one we really have to think about!”

Niina laughs. “Well, if everybody else is eating the bass player I guess I’ll have to join in!”

‘Borrowed Time’, Barbe-Q-Barbies first album for Dissonance, will be released on 17 May.

On The Road – Tour Diaries from Desolation Angels and Mindwars

WONDERFUL THINGS – Tokyo Blade’s Andy Boulton opens up about ‘Valley Of The Kings’, the debut album by The Last Renegades.