Dave Brunt on the trials and tribulations of Deathwish’s debut, ‘At The Edge Of Damnation’

“I first had the idea for Deathwish in the early Eighties,” recalls guitarist Dave Brunt, aka Dave Deathwish on the sleeve of ‘At The Edge Of Damnation’. “I wanted to combine the doom of Sabbath and the (then impressive) speed of Motörhead. A while later I was introduced to punk bands such as Discharge and GBH, and then got into bands such as Venom, Mercyful Fate and Celtic Frost, and all this had an influence on the developing Deathwish sound. I did have trouble finding musicians into the same stuff as me, but I then met drummer Brad Sims in late ’82 or early ’83 via an ad in Sounds and he pretty much had the same tastes and ideas as I had. We tried to recruit other members for the ‘ahead of its time’ proto thrash Deathwish – needless to say we failed dismally and, with frustration being the main catalyst, Brad and I parted company around 1984.”

That, however, wasn’t the end as far as Dave was concerned, and he carried on “developing the band sound” as he puts it until he met up with vocalist Jon Van Doorn around 1985 via another music paper advert. “Jon added some ‘proper’ vocals and a chorus or two to the mix. After the obligatory searching for compatible band members we eventually got back in touch with Brad, who was the only drummer who could play Deathwish songs properly anyway! Bassist Stuart Ranger was then borrowed – and subsequently poached – from local trad-metal band Taor. A demo was made, sent off and then after a few months of tumbleweed and thumb-twiddling Metalworks were the first label to show any serious interest in the band.”

Which, of course, is where the trouble starts… “I was definitely at the heavier end of the scale music-wise and was starting to get into the likes of Slayer and S.O.D. too,” he continues. “That said, I think the songs of [second album] ‘Demon Preacher’ were more influenced by that sound while ‘At The Edge Of Damnation’ was more the product of being influenced the previously-mentioned bands. We were quite competitive and wanted to throw down the gauntlet with ‘At The Edge Of Damnation’, aiming for it to sound as raw and heavy as humanly possible. The record company brought in ex-Saxon producer Peter Hinton, who responsible for their ‘Wheels Of Steel’ album, with Mark Dodson as engineer. We were quite impressed with Dodson’s pedigree as he had worked with numerous name bands, most notably Judas Priest (where Rob Halford was an obvious vocal influence on Jon at the time). Mark told us a few tales over a pint or two – none of which I can repeat here!

“But impressive resumés aside, the record label and producer seemed to want to steer Deathwish in a British trad-metal sounding direction rather than the speeded up doom-punk-metal racket Deathwish wanted. We told Mark how we wanted to sound; he twiddled a few knobs and pretty much captured our sonic vision straight away. However, once the recording was completed the album was then mixed minus the band’s presence, and we were not best pleased with the final results to say the least. It didn’t help that the first batch of albums sounded very muddy due to a faulty pressing. So we were extremely unhappy with the album at the time, although despite our misgivings and the initial faulty (but later corrected) pressing the album was actually quite well received by the major metal press at the time. We even got a KKKK rating in Kerrang! and a score in the 90% range from Metal Forces. Overall though I felt very bitter about the whole experience regarding the album and tried to not give it too much thought until the Dissonance re-release which has helped me re-evaluate the project. In my opinion ‘At The Edge Of Damnation’ has been brought back from the dead and given a new lease of life, thanks to Dissonance. They’ve done an amazing job with both the album re-master and the re-printed artwork. The songs have more clarity, more bottom-end, and you can now actually hear the bass! So I now look upon the album a lot more kindly and feel a lot more positive about it.”

I ask Dave if he can confirm the release date which I’ve got down as May 1987. “It was around that time,” he laughs, “but we’re going back over thirty years now – people get less for murder! – so I’m not exactly sure of the exact month. It was definitely 1987 though. Another thing about Metalworks, by the way, is that they wanted to sign us long term while we wanted to do a one-off deal and then sign to a major label. This caused a lot of conflict that never got resolved, and of course we also never got any royalties from the label. But in an amazing turn of events Metalworks founder Peter Chalcraft gave us the rights back to ‘At The Edge Of Damnation’ in 2016 so Dissonance could re-release the album unhindered. Which was nice.”

Listening to the Dissonance re-issue now it’s apparent that ‘At The Edge Of Damnation has stood the test of time. “I think the new re-master has really helped facilitate this,” Dave agrees. “I’m now hearing things I previously didn’t know were there. Although I think a couple of the tracks are slightly dated there’s enough on there to make it worth a listen – or even a purchase!” he laughs again. “And I think the songwriting is pretty good. It has strong riffs and good hooks and choruses. I really like ‘Forces of Darkness’ which I think was us trying to sound like a cross between Celtic Frost and Mercyful Fate!

“It is a very riff-heavy album and has a distinctive sound – it’s definitely quite British sounding. I’m glad we tried to be a bit more original and not just copy ‘The Big Four’. A lot of the British bands were taking their cues directly from the US bands, but just like Sabbat we were trying to cut our own path. And ‘At The Edge of Damnation’ was definitely a stepping stone to our follow-up ‘Demon Preacher’ which I thought was much improved.”

‘Demon Preacher’ appeared in 1988 on GWR, home to the likes of Motörhead and Girlschool, with Dave handling both the guitar and bass parts, but unfortunately the band hit the buffers around 1991. “We signed to GWR via our then manager Tom Docherty, who now co-incidentally works for Dissonance – small world, eh? Despite a few hiccups along the way ‘Demon Preacher’ came out surprisingly well. The album was band-produced and despite a smallish budget it had enough sonic bollocks to compete with the big boys. At least the press seemed to think so: we garnered some very favourable reviews in the major metal mags. We were then put on a tour with Motörhead and things were looking up. Unfortunately GWR ran into difficulties – which I think was to do with the distribution company – and our album was put on hold while the company tried to sort itself out. So, to cut a very long story short, the band had become very bitter and jaded with the music industry, and the lack of receiving any real money to speak of wasn’t helping either. Unsurprisingly there were tensions within the band as well.”

Dave confirms that the band were looking at a third album. “Jon had presented quite a few new tracks but I didn’t really see them as Deathwish so didn’t really bother to learn them. There was quite a ‘down’ vibe in the band at this point and I really felt it was time to call it a day – and I’m sure the other band members did too. As I had started Deathwish and the music was so dependent on my riffs and playing style I didn’t think it right to carry on as that band without me, although of course Brad and Jon had made a big impact on the music as well (at his point Stuart Ranger was long gone). We held a meeting in a backstreet Worthing pub in, I think, early ’91, had a final, sombre drinking session and agreed to knock it on the head. Brad and Jon then went off to form a couple of bands although they never really got anywhere which was a shame as some of the music was pretty good, although not Deathwish in sound. I went on to do a couple of musical projects but that’s another story for another day!”

Fast-forward to the present day and there’s a rumble of thunder coming from the Deathwish camp once more.

“It’s been a long time coming but things are looking quite promising,” says Dave. “I’ve written quite a lot of new material – a lot of it fast as well. There’s a bit of debate about the current line-up; Brad Sims and myself are on the same page musically – both of us are still liking the doom of early Sabbath and the fast energy of GBH and Discharge, and we also like a bit of Killing Joke discordance as well. So that’s a bit of a clue as to what the third album could sound like! Original vocalist Jon Van Doorn seems to be on a bit of a different musical wavelength so I’m not sure at this stage if we’ll be working together again, and bassist Stuart Ranger fell off the radar a long time ago, residing in the depths of Eastbourne possibly,” laughs the Brighton-based guitarist, “so Brad and I are currently working with Italian bass player Graziano Stefanutti.

“We have been updating some of the older tracks and have ‘At The Edge Of Damnation’, ‘Demonic Attack’, ‘Exorcist’, ‘Forces Of Darkness’, ‘Demon Preacher’ and ‘Prey To the Lord’ in the current set. We are just about to work in the new numbers as well – the idea is for the third album to sound like Deathwish but also be a progression – so you won’t be hearing much of the Bay Area sound on the new record!”

Meanwhile, there is one track from the sessions that didn’t make ‘At The Edge Of Damnation’. “Err, yeah, we did a country & western version of ‘Sword Of Justice’. It had Peter Hinton on main vocals, Jon on backing vocals, me on acoustic guitar, Brad on snare, Stuart on bass and I think Mark Dodson on piano. I’m not sure what happened to it…”

Probably for the best, eh?

To stream or buy the two Deathwish albums ‘At The Edge Of Damnation’ and ‘Demon Preacher’ please click below: 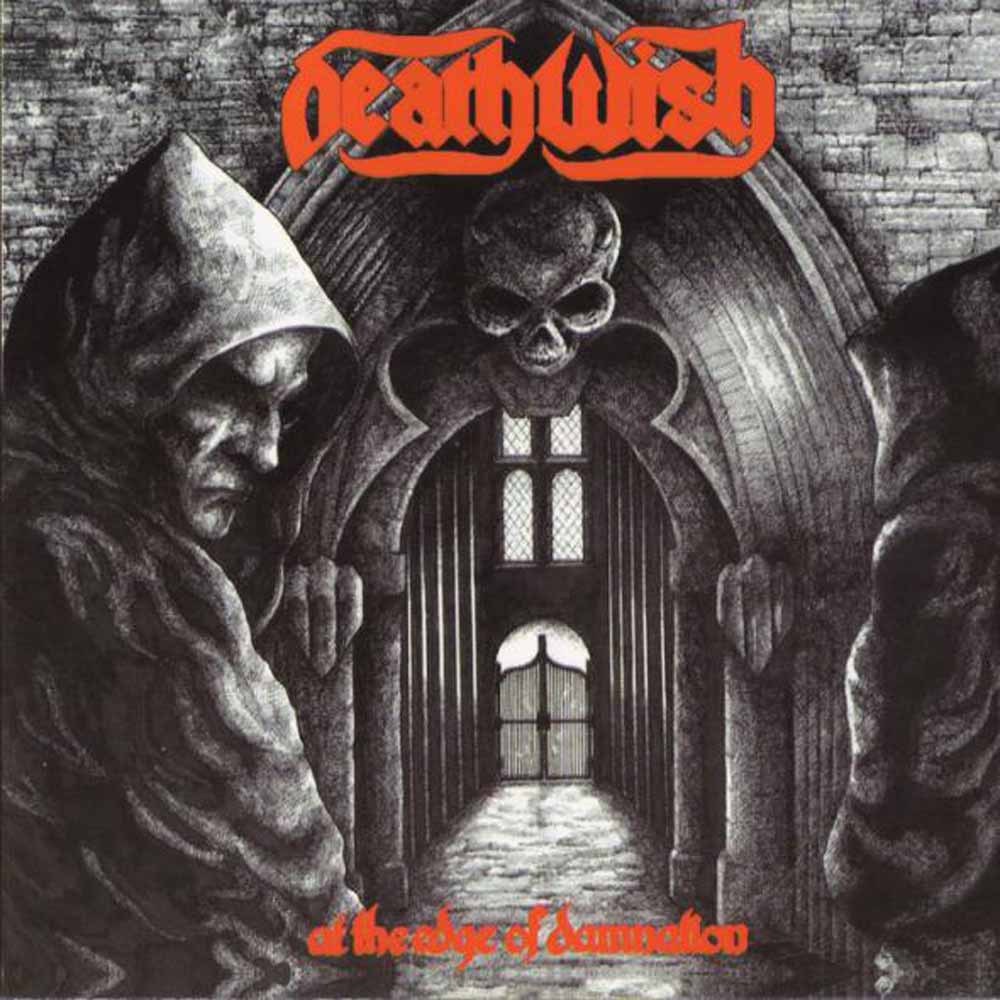 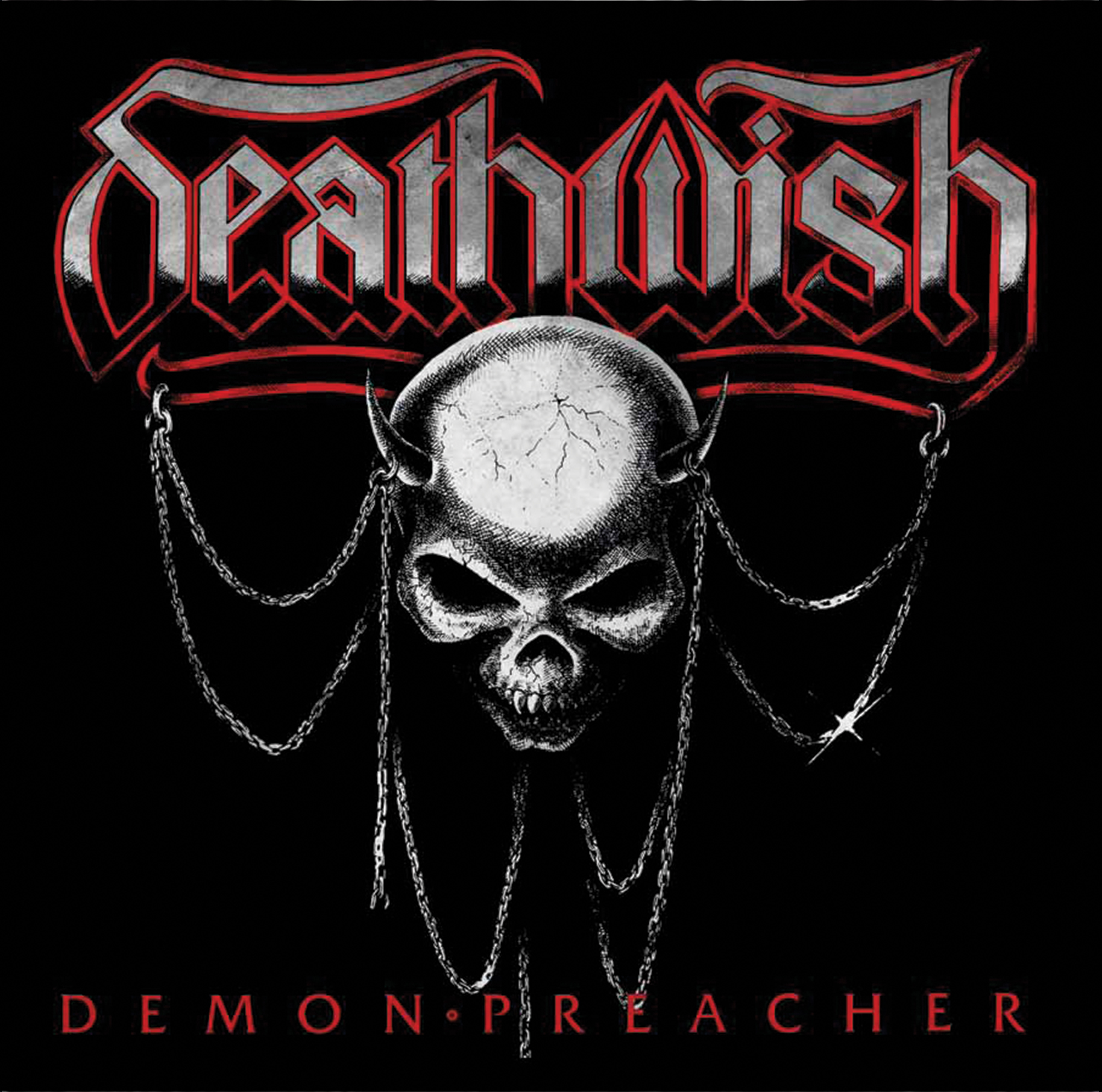