One of the things that comes through most when talking to Marek Steven is his enthusiasm for Amulet’s second album. He is actually worried that he sounds cocky, but in truth he’s just pleased with the way ‘The Inevitable War’ has turned out. “I am an enthusiastic person anyway,” he admits, “but having played this type of music for longer than I’d like to admit it’s nice for me to have an album that I’m really happy with and proud of in every way. I’m fussy myself, but as a band we are very pleased with the album and are quietly confident about it.”

Amulet have been out of the reviewers’ columns since their debut album ‘The First’ appeared in September 2014, and the band whose photo appears on ‘The Inevitable War’ looks very different to that earlier line-up. The changes though have in some ways actually helped, and certainly prevented the band rushing too quickly into their second album. Marek agrees. “We’ve been forced to take our time because of different band members unfortunately leaving and the time it takes to replace them. And life gets in the way too. It’s taken too long but it actually forced us to take our time with the writing and work into the songs more which has been useful. We really got into the songs quite deeply over the years and got them to the point where they are perhaps as good as they can be.

“Originally,” he continues, “I had the idea to start the band around 2009/10. I was in another band, Invasion, at that point, a different but still heavy riffing band, but I wanted to do something more traditional, and eventually started Amulet with Will [Dozer] the bass player and Dave [Sherwood] on Drums the drummer, and then and Jamie [Elton] the singer and came in. Nippy – James – was our first permanent lead guitarist, the first lead guitarist who’s recorded with us because on the EP a friend of mine just came in for a couple of hours and did the lead,” he elaborates. “So we’ve still got what I consider to be the ‘founding’ guitarists in the band, although the rest of Amulet is fairly new. Will is a tattoo artist and he wanted to focus on that – he travels around a lot – and was finding it stressful combining that with gigging. Then Dave left next because his life was changing, and it’s quite time-consuming and demanding being in a band. And Jamie our singer wanted to move to Sweden: he stayed in the band for quite a while after he moved there but it was very hard to write songs etc with him in a different country.

“But we have found great replacements along the way. Sam Mackertich, a good friend of ours, was in Deceptor – great bass player/guitarist, plays keyboards, and he helps us with the artwork (as Will did); he’s quite a funny character and a good stage performer, too. Sam’s brought a lot to the band and he also writes a lot of the lyrics now. Neil [Ganesha] is an anglo-American who lives in Camden and he’s an incredible beast of a drummer. He has the same power as Dave but a slightly different style, maybe a bit more technical, bit more variety, but still a beast. And he’s a one-take-wonder guy too. Finally, there’s Mace, who we were very lucky to come across. One day at the Dev [the Devonshire Arms] in Camden I was moaning about not being able to find a singer and a friend of ours, Stella, an Italian girl, said ‘what about my friend Fed, aka Mace?’ So we contacted him right away and the rest is future history. We tried each other out at a gig at the Underworld supporting Cirith Ungol in May last year; he really enjoyed it and we got on really well, so we are chuffed that he joined and it’s been all very easy. So now we’ve got a fantastic bass player who writes lyrics, a really amazing drummer, and a super powerful singer who’s got an incredible range. It is sad that the other guys left, but I often feel that this approaching the idea of the ultimate band I had in my mind when I had the idea of forming a tasty, no-bullshit, riffy, heavy metal band. We all get on well and we’re all pulling in the same direction so it’s quite exciting now to have this album as a kind of Ground Zero for Amulet MK2.”

Given that Marek had opened the door to talk about second album ‘The Inevitable War’ I wondered if there had been a game plan for the album. “That’s a good question… the game plan was to take a more time with the recording and mixing process and perhaps have more control over it by spreading it out. We chose to use Nip’s older brother Tom Blackford who isn’t really a producer (he has a really good job in tech) but he’s a bit of a genius with sound. He has an amazing, calm and nerdy approach to recording and mixing that we benefited from massively. When we started talking to him, we all agreed that we loved Martin Birch’s work with Iron Maiden, Deep Purple, Blue Öyster Cult and Eighties’ Sabbath etc – the sound and the clarity of the vocals and all the instruments and heaviness without being over-bearing. That was the broad idea and Tom was a dream to work with. He really put a lot of time into all aspects of the process and hopefully it shows. It’s a bit more high-fidelity, a bit more chunky on the guitars, and the vocals have got some double-tracking for the first time ever. There are keyboards almost throughout, quite a lot of sound effects, so hopefully it’s got more colour to it. The aim was to come away with something we could be proud of for the rest of our lives – which is the idea with albums, right?”

‘The Inevitable War’ comes with extremely impressive cover art, a sixteenth century painting by Pieter Bruegel the Elder. “The working title for the album was ‘The Second Dimension’ and we were looking at violent 2D embroidered medieval tapestries of battle scenes. James was aware of the artist and suggested this painting and of all the similar paintings we looked at this was the most powerful. We then changed the name of the album to suit it. I like the fact that it’s quite an original image of a battle, and there’s a large amount of detail: it’s fun listening to an album with a sleeve one can look and get lost in. It’s based on a religious scene but it’s depicted in a modern – modern being sixteenth century – way with battle regalia and outfits. We’ve got two or three songs on the album that are war-themed: ‘Siege Machine’ which is Saxon, our key track ‘Roundhead’ which is about the English Civil War and ‘Poison Chalice’ which, lyrically could be medieval.”

The three-part ‘Roundhead’ is the album’s tour de force, and is led by guitarist Nip. “He had the idea for a song called ‘Roundhead’ about the English Civil War a number of years ago and demoed the song with Tom. It’s basically the same song on the album just with a longer outro and vocals. He had this vision of an epic track about this part of English history which is hugely significant but not covered much in music. It always struck me as a fresh and suitable topic for what is a fairly ambitious, Iron Maiden-ish banger. We’re filming a video for it over Easter weekend at a massive Civil War re-enactment in Basingstoke with The Sealed Knot society. They’re a great bunch, they put a lot of effort into what they do and have been very supportive of us filming at this event. We’re going there with a full backline and we’re going to film various scenes. I don’t want to give away too much, but it’ll be a fun weekend and hopefully we’ll come out with something entertaining to suit the song.

“We do all take an interest in the videos anyway so we’re aiming to do a video for every track. We’ve got two done already and the third one almost finished, so that’s something to look out for. These days I think a lot of people spend their time on YouTube, so we just try to come up with fun ideas for tracks for videos – not necessarily with us in – so hopefully people get to check us out.”

It’s lyrically a diverse album and at one point even a phrase in Latin gets worked in. “Yes, that was an idea I had quite late on. In ‘Poison Chalice’ there’s a gap in the song where we all stop and there’s quite a long pause and I thought it would be great if the singer whispered something. At the last minute I was looking up phrases and came across this – ‘Degeneres animos timor arguit’ – by the Roman poet Virgil. It’s a quote about fear being a sign of weakness. And it’s weird because around that time I was chastising myself for having made a decision that arguably I made out of fear. It was like ‘for fuck’s sake, take your own advice!’” he laughs, “so now I’ll have to listen to that track for the rest of my life as a perpetual reminder of my fear!”

I decide to spring the ‘have-you-got-a-personal-favourite-track’ question… “You know what, I actually don’t at the moment,” Marek replies. “I’d say that ‘Roundhead’ is quite an exceptional track. And I’ve got a personal connection with ‘The Satanist’ because I spent a lot of time writing most of that one since 2014 and I’m pleased how it came out. But I think the one I enjoy listening to most at the moment is ‘Poison Chalice’ which I think is a strong tune, but that’s maybe because it is the last one we finished. We all seem to think ‘Burning Hammer’ is a stand-out. And from the start, when we were writing it, I was always saying ‘this is my favourite!’ I just had a gut feeling about it – it’s a catchy, simple, mid-paced song that has a certain confidence about it as a result of that simplicity. It came out well and it’s the one that we decided should be the track to launch the album. So if you put a gun to my head…”

…Or a musket, I suggest.

One final laugh. “Or a musket! But yes, that would be the one.”

To buy or stream ‘The Inevitable War’ click on the link below: 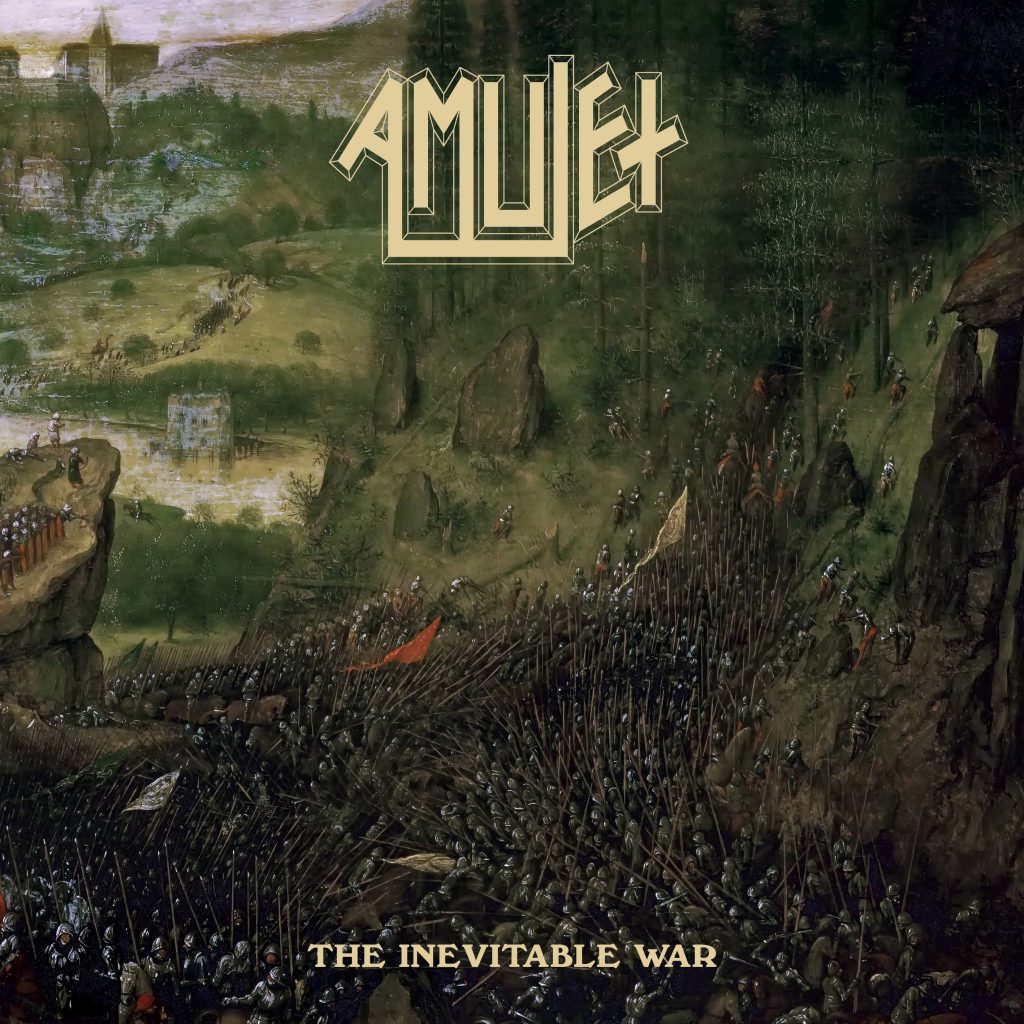