With a new line-up and two singles to their name Acid Reign started work on ‘The Age Of Entitlement’, their first album for twenty-nine years. As with ‘The Man Who Became Himself’, ‘The Age Of Entitlement’ was produced by Jayce Lewis. “With ‘The Man Who Became Himself’ it was the first time we’d used Jayce,” vocalist Howard ‘H’ Smith points out. “We’d actually booked his studio and a producer who uses it, and Jayce was just going to be the engineer for the session. But the producer lasted just half the first day and we never saw him again. No reflection on us,” he laughs, “but he said he was going to take the song home and work on it. When we went in the following day we were told he’d not made it in but had forwarded what he’d done, and it was rubbish. So we did it again. Jayce, poor lad, all of a sudden he’s engineer, producer, the lot, and that’s really not what he was expecting but he went above and beyond for us. It was the hardest recording session I’ve ever been involved in, but we got there in the end and I’m pleased with my performance on it. I really like working with Jayce, and he’s done a brilliant job on the album. And he’s really well connected, so it’s thanks to him that we found Jens Bogren who’s mastered the album and has done an incredible job.”

The cover art comes courtesy of Mark Wilkinson. “Marillion, Iron Maiden, Fish, Judas Priest, Acid Reign… It doesn’t really roll off the tongue, does it,” Howard suggests. “I was introduced to Mark by Al Barnes, who used to be in Venom around the ‘Prime Evil’ era. He lives in the same village as Mark and has always said that he’s a top chap and all the rest of it, and he introduced us at Bloodstock. Now, I’m a big fan. I love all the Marillion artwork. In fact, they were my band: the reason I fell in love with music was Marillion. So here I am talking to the guy who designed the artwork for ‘Script For A Jester’s Tear’, ‘Fugazi’, Misplaced Childhood’, ‘Clutching At Straws’, all of the Fish solo stuff, the latest Priest album, Maiden’s ‘Book Of Souls’, and I broached the fact that we were doing an album, while Al was saying ‘these guys are awesome’ and all the rest of it. Mark was very cool, but it was, like, ‘well, I’m trying to cut back on stuff at the moment. And if you want heavy metal skulls and things like that I’m not your man anyway,’ which I already knew. I was desperately trying to think of some way of getting across to him that we’re not a typical metal band, so I mentioned that there’s a cover of a Suzanne Vega song on the album, and that she really likes it. ‘Oh, really?’ he asked; ‘which song?’”

Acid Reign’s cover of choice is ‘Blood Makes Noise’, from the 1992 album ‘99.9Fo’. “Now,” continues the frontman, “no-one over here really knows ‘Blood Makes Noise’.  It was a No.1 single in the States but over here Suzanne Vega means ‘Marlene On The Wall’, ‘Tom’s Diner’, or ‘Luka’. Mark says, ‘great track: I’d really be interested in hearing that,’ so a couple of weeks went past and I fired him an email with an mp3 of the demo and he messaged me back about ten minutes later. ‘Dude, this is absolutely brilliant. I love it. I’d love to be involved with doing your artwork.’ And for me, that’s massive. As a Marillion fan, I was writing Acid Reign lyrics in my bedroom at home in front of a huge Marillion ‘Punch & Judy’ poster, and to have that guy doing the artwork for our first album in twenty-nine years is a bit of a mind-fuck!”

As for Suzanne Vega… “Well, we really wanted to ‘Acid Reign’ a cover version, but every time we came up with a song at least one other person in the band would say it was crap. I mentioned ‘Blood Makes Noise’ to Paul, and about two weeks later I was driving to a gig and he messaged to say ‘I’ve sent you a demo’ and there it was, on my phone, so I was singing along with it in the car thinking ‘this is going to be brilliant.’ I stuck the vocals on it and all of a sudden the argument over which cover version we should do disappeared! I emailed it to Suzanne Vega’s management and also sent it to her Facebook page along with a note saying, ‘look, I’ve been a big fan since back in the day, I actually ripped off one of your lyrics on our album ‘The Fear’ (and no, I’m not saying which one) and this is a homage, our version of your song done with love and respect. Hope you like it.’

“About two weeks went by and I’d just got home from a comedy gig [Howard has a stand-up alter ego called Keith Platt, Professional Yorkshireman] when my phone vibrated and there was a conversation waiting to be had on Facebook messenger. I didn’t know who it was so I answered and it was Suzanne Vega and the first line of the message – because I’d said ‘hope you like it’ – was, in capitals, ‘I LOVE IT’. And, in fact, I’ve actually got a screenshot of the conversation framed in my front room. It says ‘I love it, I want to copy the link and share it with my team. Here’s my email’ – she gave me her personal email address – ‘please send me an mp3.’ So I replied, ‘yes, you’ll have it in a few minutes’. Then she said ‘puts me in a really great mood, I must say. Thanks for this.’ It was absolutely brilliant.”

Asked to describe ‘The Age Of Entitlement’, Howard calls it either “a contemporary thrash album with an old-school twist or an old-school thrash album with a contemporary twist. I think it’s the latter, and, I mean, what more do you want as an Acid Reign fan? Has it got lots of fast songs? Yes. Has it got catchy choruses you can sing along to? Yes. Has it got lots of shouty backing vocals? Yes. Has it got a song about a horror film? Yes. Has it got a fucked-up cover version of a song that’s just wrong? Yes. It’s got all the ingredients that, as an Acid Reign fan, I would want. Everything’s on there. But, also, it is updated, so it sounds more like ‘The Man Who Became Himself’ and ‘Plan Of the Damned’ than our last album in 1990 when we had a completely different line-up and were nineteen years old.”

Back in the late Eighties / early Nineties Acid Reign never seemed to get the respect they deserved. “I think our image did hold us back,” the frontman admits. “But I also I think there was a definite laziness within the journalistic community that kept saying we should stop having fun, or that we needed to stop having fun for our band to be taken seriously. Which is bizarre because ‘Obnoxious’ which came out in 1990 has got a seven-and-a-half minute song about childhood suicide on it – twenty-nine years, I might add, before people began to see it as a major problem. And there was a song about nuclear testing too, but ‘oh there’s a pink cover on it; it’s the joke band again’ seemed to be the journalistic mentality. If journalists tried to get away with that kind of lazy bullshit now message boards would just be full of our fans going after them. We are a serious band. Yes, we have a laugh live, but the music is serious and our legacy is everything I’d ever wanted it to be. People remember Acid Reign shows with a nostalgia that they quite simply don’t remember other bands from that time with. They were never normal shows, you never knew what you were going to get, and I said to someone once that we didn’t play gigs, we hosted parties! And I guess we’ll continue to do that. But, if I’m honest, there’s no ‘UK Apple Core’ on the new album, there’s nothing stupid, and there’s no jokes, because all these years later I’m not leaving myself open to the same fucking accusations. I want people to really digest this album as the serious thrash metal album that it is. And we’ve always produced serious thrash metal albums, and we’ll always have a sense of humour, so there’s no need for anyone to get out of their prams because there’s no stupid artwork and there are no jokes. Don’t you worry: we’ll still be the same band you see live, but we really did want – coming back after twenty-nine years – for everyone to go ‘right, this is a serious fucking album’. And it is.”

Howard agrees with my assertion that the world is now a different place anyway. “It is, massively. But also, from my point of view as a lyric writer, I’m hugely different too. What I would say is that when you’re nineteen, as I was when I wrote the lyrics for our last studio album, you write about your opinions, but when you’re forty-nine you write about what you feel. And that’s a major difference. Also, as a kid you’re desperate for everybody to get exactly the point you’re making, you know exactly what the lyrics are about for each song when you read them back; but now there’s a lot of room for interpretation as to what I may or may not be driving at. There’s a trilogy of songs about mental health, the first of which was ‘The Man Who Became Himself’ and there are two more on the album. But whether or not people will actually relate to those songs being about mental health… They could be about anything. Ultimately, in this day and age, if anyone actually pays any attention to the lyrics whatsoever I’m over the moon anyway. So you decide what it’s about, and whatever you decide it’s about, it’s about. I’m good with that.”

Trivia time… I’d already warned Howard this was coming so he was armed and ready. “There’s a woman who gets a special thanks on ‘Moshkinstein’ called Mrs Geldart. And that’s because I used to hang around her antiques’ shop as a kid on Saturday mornings with my mum when I was too young to be alone. I spent so much time kicking around there that when our album finally came out she got a special thanks on it and I gave her a copy. She gave that to her grandson, and it was the first record he ever owned. And that grandson was Ricky Wilson from the Kaiser Chiefs. They say they’re from Leeds, by the way, but there’s a couple of them from Harrogate – but you’re never going to say you’re from Harrogate unless you’re a stupid thrash metal band like us!

“And,” he continues, “to your question ‘if the band was marooned on a desert island, which one would we eat first,’ my honest answer is that I’d go vegan. I’ve seen what those boys eat, I know where they’ve been, there’s not one of them that I would take a bite out of! And they certainly wouldn’t eat me. There’s more meat on a chicken’s lips!”

Acid Reign’s ‘The Age Of Entitlement’ will be released on 27 September. Pre-order now: 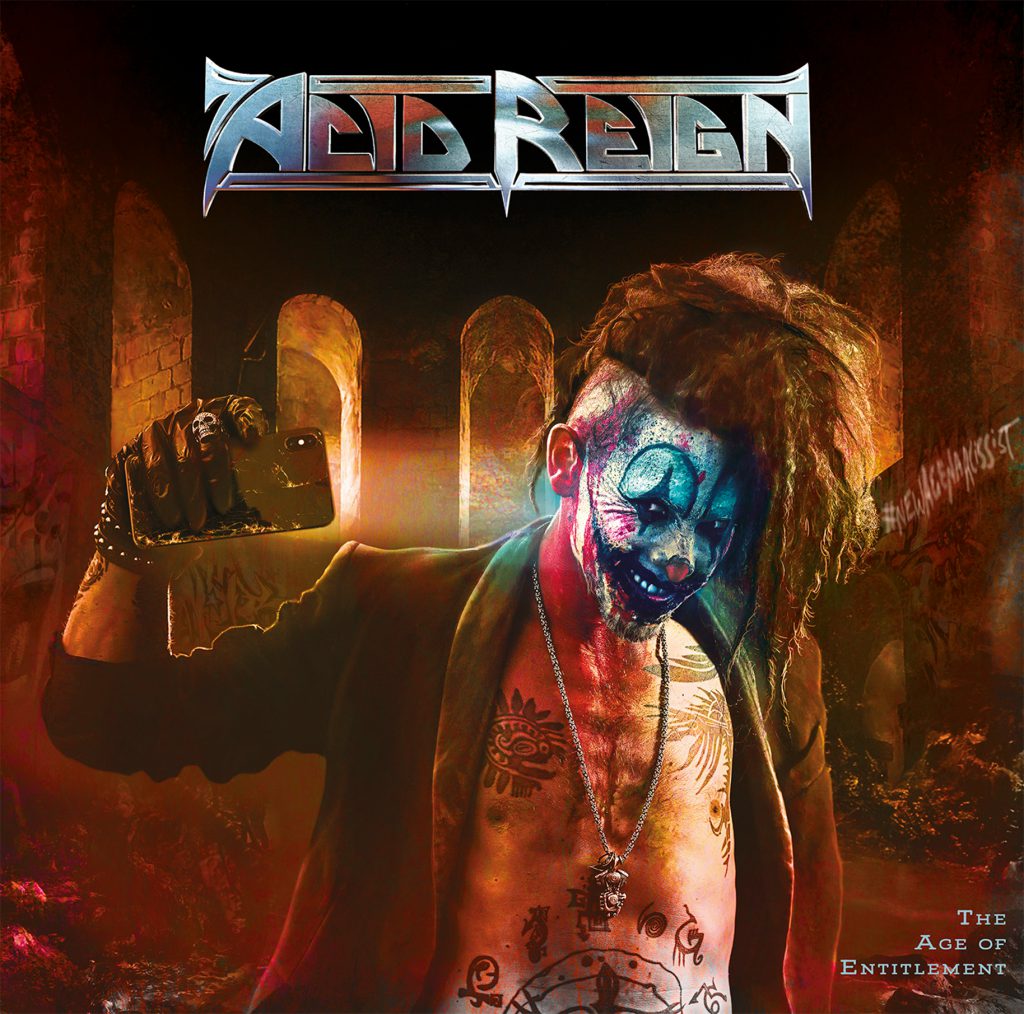