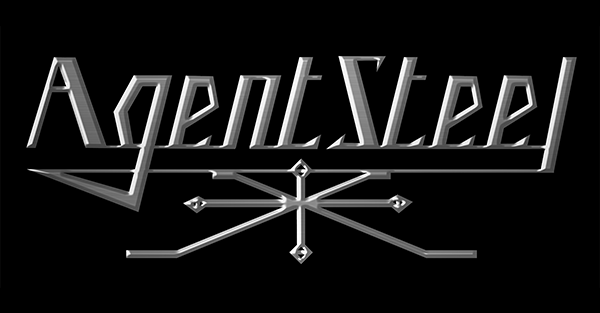 The hugely influential and highly-exciting Agent Steel first broke through in 1985 with the release of their debut album ‘Skeptics Apocalypse’. Its blend of technical speed metal, together with frontman and founder member John Cyriis’s distinctive vocals, set it aside from the plethora of thrashers that were flooding the record shops and the following releases ‘Mad Locust Rising’ (1986) and ‘Unstoppable Force’ (1987) cemented the band’s reputation as forerunners of a new direction for metal. Signed to Combat in the US and Music For Nations in the UK, Agent Steel became the target of interest for Columbia Records (who’d recently picked up Megadeth) but by the end of 1988 it was all over and the band split. Ten years later guitarists Juan Garcia and Bernie Versailles reformed Agent Steel, but without including the enigmatic singer or even gaining his consent to use the name. An attempt at a formal reformation in 2010 floundered, but around a year ago John Cyriis reformed the band in its original image. With a new album ‘No Other Godz Before Me’ gearing up for release John was happy to talk to Echoes about the band’s rebirth.

It’s been a long time since those three classic releases from your band Agent Steel – Skeptics Apocalypse (1985), Mad Locust Rising (1986), and Unstoppable Force (1987) – what have you been up to since then?

I’ve been trying to figure out why the Earth is the only planet in our solar system tilted at 23° as it transits on its diurnal path around the Sun. There are many theories, most being too multitudinous to elaborate on here. In truth, I’ve just been dangling around at different corners of the planet, trying to figure out why there is—basically—only one Queen Elizabeth, and one Mick Jagger born in London. And so subtracting these two individuals from the total population of London (8,173,941) the reduced total equals 8,173,939. Could it be that the larger ratio is insignificant, or justly perhaps less noticed, or handed a different life passport by the decisive laws of nature who, based on some master plan, segregated the two by sign-posting their birth, collaborating the timing of a significant star or planet being conveniently angled close to the Earth, above the hospitals where they were born?

You either are, or you aren’t. It matters not if you’re not as they are, but stop fucking pretending or acting like you are—when you’re not! That’s my message to some of the arrogant musicians I’ve recently met in the metal community. Agent Steel is not a panacean musical entity; AS has never been — and will never be—a band that makes music via brainstormed concepts that are politically correct! AS was not created to please society, or a bridge brigade for ghouls!

Listen up, People, the fact that this current author/composer spat a politically-incorrect approach to making music and its attached concepts is what made Agent Steel the brand that it is today. Period.

What’s tempted you back to the limelight once more now?

I thought it would be a fine gesture of honor to reactivate the true Agent Steel inclusive of its frontman/creator. Agent Steel has never been a politically correct musical entity, due to the fact that I engineered and brought about its birth and recognition by weaving within the lyrical concepts, musical ambience, and thought-provoking subjects—never before tampered with subject matter—the provocation as to the possibility of life existing elsewhere in the universe, and the stigmas attached to the human condition as reactor. I had brought out by exposition the brand known as Agent Steel to stand as nothing other than the forerunner for spatting taboo subjects campaigned via a heavy metal outfit. My lyrical approach, and concepts within the fabric of its essence, served as the platforming stigma attachment by which I managed to entertain a confrontation before humankind—espousing the question as to ‘why society has always been, and continues to be, a cabal of cosmic xenophobes, supported by displaced egos who would surely repel any rewarding contact with beings from other galaxies (and even other dimensions) simply due to their ‘ignorance!’’ In retrospect, I believe this is why Agent Steel has achieved some interesting status; the political incorrectness is the formula by which I have achieved an ultra-uniqueness, and even obscurity, as compared to the artistic politically correct norm (especially) in metal music.

At the beginning of the day, this is what has inspired me to reactivate Agent Steel.

You’ve got a new album due, the fourth real Agent Steel release ‘No Other Godz Before Me’. Can we talk a little about that, please? :

First, I must quote here Mr Joe McGuigan, who recently stated: ‘Fans have waited thirty-plus years for this follow-up to ‘Unstoppable Force’—so an extra month or so extra wait for the delivery of the album of the millennium isn’t much to ask for!

My goal as far as ‘No Other Godz Before Me’ was to create a continuation to the story of ‘Unstoppable Force’; to bring about the exposure of different research I’ve stumbled upon spanning over the past thirty years. Musically speaking, I have onboard the line-up / space capsule a team of very competent, professional musicians, who have tackled a major challenge – and that is to create music that would not only serve as a bridge to the ambience and original concepts created by former line-ups and myself but in reality also serve as an all-out manifest transcendence of all that has been previously released as Agent Steel.

Via the release of ‘Unstoppable Force’ the objective was to create an evolution to that very genre of metal music we all had already embraced in the Eighties. So, this time around, we are certainly not out to merely replicate what’s already been done.

It didn’t come together easily. Me and some assigned workers from my publishers who decided to jump onboard the metal train of risks and challenges, grinding our teeth and often biting our tongues, have been hard at work trying to put together the new Agent Steel line-up since early 2018. It hasn’t been easy, considering the tall order to fill, bringing on musicians who will dare step up to the plate against Your Majesty, Bernie V., and other hostile former Agent Steel line-up personnel whom I won’t mention here by name, being those that are very biased toward me, my family, and unjustifiably so.

Does the title have any significance?

Of course it does, as do all Agent Steel album titles. Once you see the cover of the new album, you’ll understand where we’re going with it. This album cover will represent the meaning of the title, and will be—without a doubt—the legendary album cover of the millennium! It’s not a cartoon animated album cover with ghouls dripping saliva from hell, but in all its simplicity (as are all Agent Steel album covers) it will certainly stand out from all the rest. You’ll all just have to see to believe, or not believe…

How would you describe ‘No Other Godz Before Me’? Is it a continuation of the Eighties’ Agent Steel sound – which was pretty groundbreaking at the time – or does it take the band in a new direction? How does it compared to its illustrious predecessors?

‘No Other Godz Before Me’ is an evolving continuation of the sounds and concepts created in the Eighties, finally fronted again by my Communicative Channel transmissions. I prefer to allow the fan and listener in general the brow-dripping wait to get a glimmer of what has been achieved within the cosmic fabric of the album. Here is the full official tracklist thus far:

Who’s in the twenty-first century Agent Steel, and how did you find / recruit them?

It’s been a spinning circular roller coaster ride since early last year, and one of the laws of nature that I have learned to apply as a result of all the disheartening lessons I have endured for the past year is: Secrets are power, and I am proud to say that the latest line-up of Agent Steel is the absolute best to date. This is why they will introduce themselves to fans in December of this year for the first time. Not much else I am willing to disclose at the moment…