Hot on the heels of September’s brand new album ‘The Age Of Entitlement’ comes ‘Anthology 1987 – 2017’, a four-disc cornucopia which, Acid Reign frontman Howard ‘H’ Smith affirms, contains “every song Acid Reign have ever released.” It’s not the first collection of the band’s material, but it is the most inclusive collection that could possibly be curated. Back in 1991, after Acid Reign had called it a day, their then label Music For Nations / Under One Flag released an album of odds ‘n’ ends entitled ‘The Worst Of Acid Reign’; and five years ago Candlelight issued a three-CD set ‘The Apple Core Archives’ which featured ‘Moshkinstein’, ‘The Fear’ and ‘Obnoxious’ together with the ‘Humanoia’ 10”, the ‘Hangin’ On The Telephone’ 7” and the contents of ‘The Worst Of…’ liberally scattered around. But, as Howard is quick to point out, “the whole purpose is that this set demonstrates the end of one era and the beginning of another. The fourth disc, apart from ‘Blind Aggression’ and the Obnoxious demos, is all new stuff. And that’s exactly how I wanted it. With the band back, and having been back for, count them, one-two-three-four years, I was like here’s all the lyrics, here’s all the music, here’s a page of brief notes which basically says what the collection is about, here’s the new bits and pieces, enjoy. And, by the way, hopefully you’ve all already picked up ‘The Age Of Entitlement’, our first album in twenty-nine years’.”

‘Anthology’ builds on ‘The Apple Core Archive’, replicating the original three discs and then swiftly bringing things up to date with a new fourth CD featuring another fifty-odd minutes of material. “When Steve [Dissonance head honcho Steve Beatty] mentioned the possibility of doing something like this, straight away I was totally into the idea. Back in 2014, when Steve owned Candlelight Records, we did ‘The Apple Core Archives’, three CDs of everything we’d ever done apart from the live version of ‘Blind Aggression’ which had been on a Kerrang! flexi-disc and which we just couldn’t find. Initially, Steve talked about just re-issuing ‘The Apple Core Archives’ again, and I thought, ‘yeah, great’ because a lot of people have said they can’t find it any more, and if they do find it it’s for silly money. So yes, great, I liked the sound of that… But then Steve said that he wasn’t keen on the whole ‘UK Apple Core’ idea which I completely agree with. Nobody’s actually noticed that we’ve kind of retired the whole UKAC thing now: on the new album there’s a striking cover and a serious picture of us but no UKAC because ultimately we wanted to tone down the whole comical aspect of the band. It doesn’t help, unfortunately; it really doesn’t. Our live shows are our live shows: they’re still as wacky and fun as ever, but we take our music very seriously and we wanted to reflect that on our new album. But, anyway, since Steve said he wasn’t keen on the Apple Core thing, and I said that I could probably pull together a disc of stuff since 2014, we decided to come up with a new release altogether.

“So, what have we got?,” Howard continues. “For a start I’d finally found ‘Blind Aggression’ [recorded at London’s Astoria on 8 March 1989 and, as Howard mentioned earlier, only available on a Kerrang! cover-mounted flexi disc].Then we’ve got the two ‘comeback’ singles, which are ‘Plan Of The Damned’ and ‘The Man Who Became Himself’ together with the demos of those songs. There’s also a song called ‘No’ which is the first song Paul [guitarist Paul Chanter] and I ever wrote. It’s called ‘No’ because if you listen to it, it’s basically me going on about people wanting us to reform, and the chorus is ‘no, no, no, no, no-no-no, no, no, no, we’re not reforming’ and the idea was that when anybody posted on the Acid Reign page asking ‘when are you guys going to get back together?’ or ‘are you going to reform?’ I’d just post a link to this song and that would be the answer. They could click the link, play the song and go, ‘ah, right, OK, I guess they’re not, then’!

“Then there’s Cerebral Scar’s version of ‘Goddess’ which I guest on. Mark Freebase, the singer from Cerebral Scar, sent me a message and said they’d been asked to put together a song for the Ian Glasper book ‘Contract In Blood’ compilation CD and were going to do a version of ‘Goddess’ and would I like to go along and sing on it. ‘Definitely. Where and when?’ So I drove over to Russ Russell’s studio – I got a chance to work with Russ, which was great – and I said ‘why don’t we set two mics up in the vocal booth, and the two of us just record it live, doing it line-by-line next to each other,’ and that’s exactly what we did…  It was quite funny actually because Mark had written the lyrics out in big letters on bits of card and gaffered them up and said ‘the lyrics are up there.’ ‘Don’t worry, mate, I do know them’!” Howard laughs. “He just looked at me, like, ‘oh, fucking hell, of course you do…’”

The cover, featuring the cut-out Acid Reign logo against a bright white background with all the older artwork showing through is clean, simple and extremely effective. “I love it!” is Howard’s enthusiastic comment. “That logo has been around for probably two years. It’s almost like it’s been sat around, waiting for this concept to come about. The logo was designed by our official photographer, John Crisp. He’d just sent it to us one day and said he’d been messing about and I said ‘Dude, that’s awesome’ and we had stickers made up in the shape of that logo to give away with shirts when people buy them at our shows. So when we put the four-disc box set together I sent a mock-up of that cover to Dissonance and Steve just emailed back and went ‘wow! That is beautiful. Dare I say it, even classy!’”

For Acid Reign, of course, it all began with the ‘Moshkinstein’ demo which Howard sent to Music for Nations in 1987 and which led to a three-album deal and the release of the ‘Moshkinstein’ mini-album in March the following year. “I came home one day and my mum was stood outside the house, saying ‘Gem Howard’s called from Music For Nations, Gem Howard’s called from Music For Nations’ and straight away, all I could think of, being a keen thrasher and someone who meticulously examined every album I bought, was, ‘that’s got to be Gem ‘Fat Bastard’ Howard listed as Metallica’s tour manager on ‘Ride The Lightning’. Fucking hell, this is amazing, I’ve got to ring him back.’ And my next thought was, ‘don’t call him a fat bastard’! I don’t like my performance on the ‘Moshkinstein’ mini-album though,” he continues, “I think it’s a lot better on the demo [included on this compilation] and I’m glad that’s been out there for a while now. I think that anyone who’s heard the two will say that my performance is better on the demo. And I think the production is better on the demo, too.

“When I play ‘The Fear’, I think I’d improved, but I still sound like an eighteen-year-old boy because I bloody was,” he laughs. “But when I listen to that album, especially the song ‘The Fear’, I think ‘Jesus Christ, are there any ideas we didn’t use?’ Every time I play ‘All I See’ and ‘Lost In Solitude’, the final two songs, the way ‘Lost In Solitude’ just goes off and finishes, there’s some hugely majestic and progressive music going on there. But both pale into insignificance compared to ‘Obnoxious’ which is my second-favourite Acid Reign album after ‘The Age Of Entitlement’. If you listen to ‘Obnoxious’ and ‘The Fear’ back-to-back it’s like, ‘whoa, what the fuck happened there?’ ‘Obnoxious’ does sound like we’d grown up. You go from ‘The Fear’; which is just packed full of, like I said, every idea we’d ever had, to ‘Obnoxious’ where, yes, there’s a lot of ideas in there, but the songwriting was such a massive improvement – the song ‘Thoughtful Sleep’ is not something we could have written two years previously. And I love the production on it. It was awesome working with Steve Harris [no, not that Steve Harris], it was my best performance by a mile and, believe it or not, Paul (who was an Acid Reign superfan of that album long before he joined the band) still says it’s one of his top ten all-time favourite albums.”

‘Obnoxious’, famously, is the album which came with THAT sleeve – one of the few pink album covers in Metaldom… “Music For Nations were always very supportive of us,” Howard says, taking up the story. “Maybe I’m looking back with rose-tinted glasses, and I’m sure they did things which pissed me off, but the way I remember it, pretty much anything we asked, the answer was always yes. Ironically, however, the one thing they did say ‘no’ to was the artwork we provided for the ‘Obnoxious’ album. So we came up with the worst idea possible and they said ‘great’ and fucking made it. I mean, that album, in Terrorizer in 2009, topped the poll for the ‘worst metal artwork ever’ – Music For Nations turned the artwork that we gave them down and thought that this was better. In my front room, right now, I’ve got a six-foot fucking pink poster from the tour. It’s hilarious though, as here we are, twenty-nine years later, on the verge of the pink album about to come out truly pink on pink vinyl. It always makes me laugh – everyone says that 1990 was the year of the ‘Black Album’, which it was, but it was also the year of the Pink Album.”

As for the original artwork… “It was used,” confirms Howard, “and anybody who saw us on that tour and bought a white t-shirt with a really ugly face on it, that was the original album sleeve of ‘Obnoxious’. If you search online for Acid Reign merch, I can’t remember the name of the website but there’s one with all our merch on it, every shirt we ever put out, and you can see what the original of the album sleeve looked like. Funnily enough, I’ve had a few people asking, with the re-releases, ‘are we going to redo the artwork for ‘Obnoxious’?’ Redo it? You have got to be fucking joking! It might be hideous, but it’s – I don’t want to say ‘iconic’ because that would be to believe my own publicity”, he laughs, – “the only fucking No.1 we’ve ever had. And it might have been for the worst album cover ever, but you don’t spit in the face of success! A No.1 on any chart, as far as I’m concerned, is a success. You don’t punch a gift horse on the nose!” 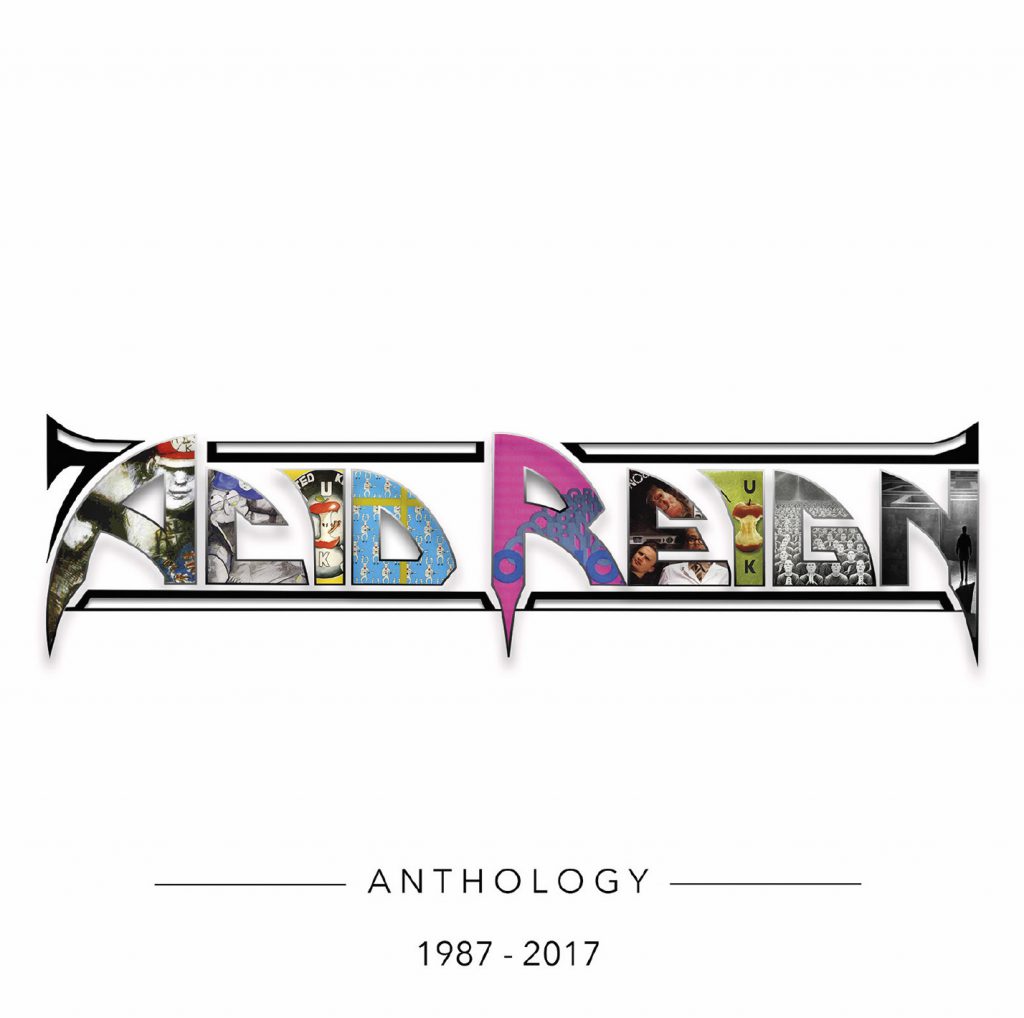