Status Quo during the recording of the ‘Quo Live’ double album at the Glasgow Apollo, 1976 I think – not sure. [Spot on, Sandy – it was recorded 27-29 October 1976] I was into the early Quo stuff from ‘Piledriver’ to ‘Blue For You’ and my cousin Brian liked them as well so he drove us there and back.

Delain at the Birmingham Academy 2014, I think, with Derek [vocalist Derek Lyon]. I don’t get to see many gigs as we are usually playing them ourselves!

That’s a tricky one, possibly the Quo gig mentioned above, though I do remember the Saga gig from the mid-Eighties being rather special – ‘Heads Or Tales’ tour, I think…

Definitely the Quo gig! Took three days for my ears to recover! Wall-to-wall stacks at the back and wall-to-wall PA along the front of the stage. I was in Row 8. My God, it was loud!!

Depends on my mood and what new stuff turns up. I’m a big fan of symphonic rock bands like Delain, Nightwish and Within Temptation though I still like classic HM like Queensrÿche, Judas Priest and Dio; NWOBHM like Trespass, Tytan and Blitzkrieg; proggy bands like Stuckfish and classic rock like Renaissance.

Definitely Queensrÿche, though only up to the early Nineties really!

I remember my first LP was ‘Quo’ by Status Quo – about 1974 I think. That’ss the one that started it all. It encouraged me to pick up the guitar, and the rest is history!

Where do I start… Early Deep Purple and Led Zeppelin. Woodstock for the sheer history, though I was too young to appreciate it! Wacken 2013, when Floor [Jansen] first performed with Nightwish. The list can be endless… 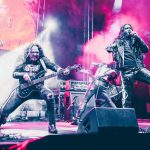 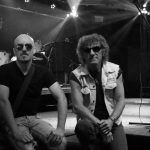