March saw the first ever official solo release of ‘While The Flame Still Burns’. Chronologically, this was Desolation Angels’ second album but following the band’s demise in 1994 it found itself languishing in the vaults for nigh-on thirty years. Unusually for a UK metal band at that time ‘While The Flame Still Burns’ was recorded in the US, the majority of the band having moved across the Atlantic not that long after the release of their self-titled debut in 1986. At this stage the band’s line-up featured founder members and guitarists Robin Brancher and Keith Sharp, vocalist Dave Wall, bassist Dave Scutt and drummer Sam Willmore.

“The album was recorded at Silvercloud Studios, Burbank, California,” recalls guitarist Robin Brancher. “This was 1990. Our drummer Sam had only been with us for a year, but after extensive gigging we felt it was time to go into the studio, and this would have been our second album release. With an imminent tour across America fast approaching, the album was put on hold. Finally with the sessions back on track, relationships became strained with vocalist Dave Wall, so it was decided he was to be replaced. By now it was the winter of ’91/’92 and with only two weeks’ rehearsal time, Lee Addison was flown out from England. With all eight of the songs reworked and recorded ‘While The Flame Still Burns’ was finally complete. It was produced by Sean Kinesie, with special thanks to Joe Floyd, for some additional guitar, and Perry McCarty (backing vocals), both of whom were in the classic American band Warrior. Many bootleg versions of the album have surfaced over the years, including ones with the Dave Wall cuts, but we feel this version does the songs justice and needs to be unleashed again.

“I’ll never forget living and working in Los Angeles. It was a fantastic time spent gigging and hell-raising, and it was an amazing feeling the first time I walked out of LAX into that sun-kissed land!

“Towards the end of our adventure in America, and in particular the recording,” he continues, “somehow the wind had been taken out of our sails, and the drive that had spurred us on for so many years had all gone away. I remember all of us being very tired with it all, even though Lee Addison did bring a certain amount of spark back to the band, and momentarily put us all back on a high. But the music climate had changed, grunge was taking over and classic rock like ours was put to one side for the time being. Our management at the time worked hard to secure a deal for the new album, but it wasn’t to be, and after all the avenues were exhausted our manager called a meeting and basically said it’s time to pack up and go home. Our sponsors had had enough and without that financial backing, a huge chunk of that momentum involved in driving us forward was lost.

“But the album was, as usual, self-financed, so it was ours to keep, and we brought it home with us. We carried on for a while back here in the UK but, with no management behind us and no real goals ahead, it just fizzled out and finished. We realised that when we returned to the UK after so many years spent living in the US, and building a fan base across the US and making serious connections with the music industry out there in the LA, coming back home after all that time was like when we first went out there:, nobody knew who we were and nobody knew we were back, and time had moved on in the UK music industry. We found ourselves having to start all over again, just like when we first landed in the US.

“It was only when Richard Walker (of The Miskatonic Foundation and Solstice doom band) made contact with us that we managed to get ‘While The Flame Still Burns’ released (along with many other tape recordings that underwent updated masterings and were finally transferred to digital files) as part of the ‘Feels Like Thunder’ box set. But the version we have now, released through Dissonance Productions, has the original airbrushed cover (based on an original drawing created by Dave Wall) and an excellent booklet with photos and lyrics – all of which makes for a great release. I have to say that I’m really pleased with it, that art is fantastic!”

To buy ‘While The Flame Still Burns’ , the band’s debut album ‘Desolation Angels’ or most recent release ‘King’ please click on the link below. 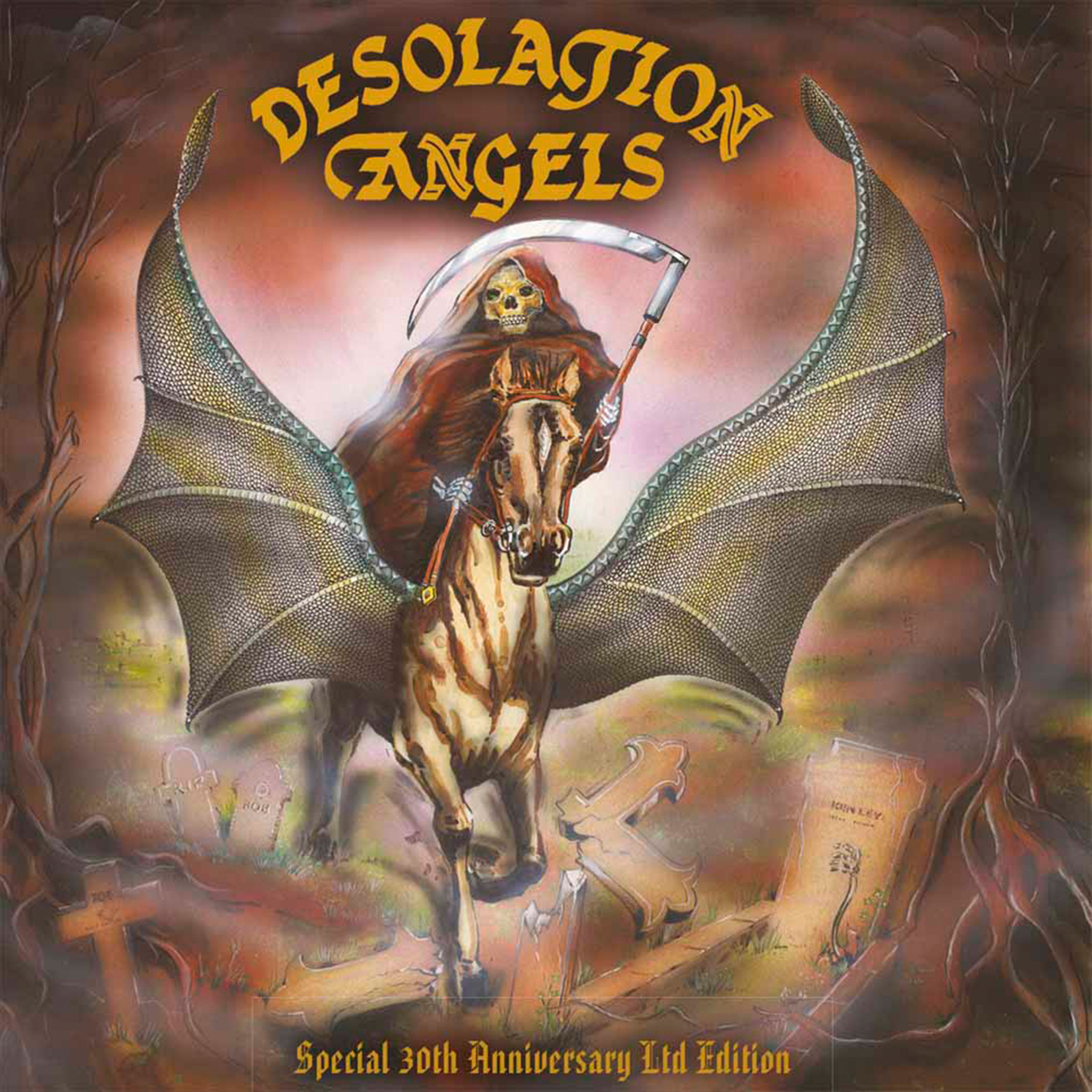