Since opening their account with the self-funded ‘Iconoclast’ 12” and CD in June 2005 (a limited edition release with a run of just 500 EPs and 1,000 CDs), Burton C. Bell and John Bechdel’s Ascension Of The Watchers have evolved from a Fear Factory side-project to an innovative and exciting outfit in their own right. They’re not a prolific outfit though: ‘Iconoclast’ was followed in February 2008 by ‘Numinosum’ (released on Al Jourgensen’s 13th Planet label), and now, some twelve years later, comes ‘Apocrypha’. A good place to start would be to find out what had prompted Burton to re-activate the band now, although that’s not the way he sees things at all.

Jayce is Jayce Lewis – producer, performer and a man of seemingly limitless talent. “Oddly enough, it was The Force that brought us together!” Burton explains. “I actually met Jayce through MySpace, back in 2004/2005. I read that he was managed by Darth Vader – Dave Prowse – and that partnership really sparked my curiosity, so I reached out to him in a message asking him ‘how?’ And it was then that we began speaking. It was not until 2005/2006 that I actually met him in person in Manchester, backstage after a Fear Factory concert. Our friendship continued to flourish through the years. But it was not until 2015, when I was in France with my children, that his invitation to visit his newly-built recording studio in South Wales came to fruition.”

“Yes, that was back when MySpace was a thing,” Jayce confirms. “MySpace had their version of a Newsfeed, and they did a feature on the fact that I was being managed by Dave Prowse – Dave and I had been involved in each other’s worlds for years. The spooky thing is though that I had no idea it was Burt at the time, because I was being contacted by this band called Ascension Of The Watchers! Ironically… So following the third or fourth reach-out by Burton I eventually went on their page, recognised his voice and facepalmed myself! I had been following his work for years, so knew very well who he was, and we’ve since become very close friends.”

So it’s fair to say that Jayce wasn’t au fait with ‘Iconoclast’ at the time. “I wasn’t even aware of the band until Burton reached out! Of course, after that I’d given the EP and then the album a listen and liked what I could hear. Getting past the audio was a little hard at first, but, again, ironically, later on it would be me that could sort that out.”

“Jayce is a very talented musician and producer,” Burton points out. “Like John Bechdel, he is very meticulous, and when it comes to production, his tenacity is unrivalled. Jayce and I spoke often, in detail, about the sound and direction that I was searching for in the new album. His Northstone Studio was not only the perfect setting in rural South Wales, but it also had the perfect technology and design for what I was hoping to achieve for the new album; a modern analogue studio. I had been contemplating and designing the concept and structure in my mind and journals for ten years. I wanted to compile a few of my musical inspirations into one amalgamation, producing a sound that would be familiar, yet new and exciting. Jayce understood what I was searching for, and was able to conceive my thoughts, and produce them into consciousness.”

“I’m not sure how things were done in the past,” Jayce points out, “but ‘Iconoclast’ and ‘Numinosum’ almost sounded like demos to me. So I really wanted to change that Big Time, and then, of course, focus on who the Watchers were and how they needed to be: that’s the job of every producer. For me, the whole thing had to evolve from ‘Numinosum’ and that’s where I came in, not only as a drummer, but as a producer and mixer too. The only thing I had set out solidly from the start was getting Burton’s vocals back to what they were in the mid-Nineties – ‘Demanufacture’ /GZR / ‘Obsolete’, that gothic, baritone howl he used to do had been sorely missed, I felt. The rest of the album kind of took its own course during the whole recording. Nothing was forced. And, of course, as I was producing and mixing the whole thing I was able to steer it to sound as natural and as powerful as possible.”

“If you listen to the albums back-to-back you’ll hear a world of difference between them,” adds Burton. “The quality in the sound production of ‘Numinosum’ pales in comparison to the sound production quality of ‘Apocrypha’. ‘Numinosum’ was our first, full-length recording effort, and we learned much from that session. The songs on it, in general, are beautiful and ethereal, and that production contributes to that recording. However, it was not exactly what I had envisioned. For ‘Apocrypha’, I wanted a more ‘sonic’ production, and Jayce was essential in developing the sound I had dreamed of. Again, Jayce and I spoke at length about the bands that inspire me, and the sounds that those bands have on certain albums, and how I wanted to bring them all together in one movement. The album itself is unique. Nothing out there right now in the music scene sounds anything like it. ‘Apocrypha’ is deeply insightful into my soul.”

To my mind, ‘Apocrypha’ sounds very much an album for the here and now – it almost seems to personify in parts these uncharted times we live in, with the pandemic, global tensions seemingly heightened, and fake news being the order of the day. “           It is interesting that you think this,” says Burton, “as it has been mentioned to me by a couple different people who have heard this album as well. However, the concepts you are grasping from this is merely a coincidence. The songs and lyrics I have written come from a deeply personal part of my soul, expanding on the love in my life, and the thoughts about my place in the universe. Perhaps this is exactly what people are needing in this time and place in our world. To search deep within the soul for meaning, to find love within, not without, for we truly cannot be at peace if we cannot find peace within ourselves.”

‘Apocrypha’ – “there’s no hidden meaning behind the title; however, the title was hidden from me until the album’s recording was completed,” admits the singer – was a difficult album to bring to life. “It’s great to finally have the album ready to be released on the world,” Jayce says. “It has to be the most eventful album I have ever worked on, between PledgeMusic going out of business, ghosts, and other things here and there.”

“For about three years I had the precursory title of ‘Stormcrow’ for the impending album, and this was the trial title for the ill-fated PledgeMusic campaign,” adds Burton. “To me, ‘Stormcrow’ was the harbinger, assailing the messages to me through dreams and portents. I would account for these messages by writing them down, or by crudely sketching them in my journals. But as the recording progressed, and the songs seemed to spiritually materialise, the track ‘Stormcrow’ was not a strong contender for a title track. Meanwhile, the song ‘Apocrypha’ encompassed and defined the album more definitively, conveying my thoughts of ten years into one word. It also fit with the primordial concept of Ascension Of The Watchers which was inspired by the Book Of Enoch from The Dead Sea Scrolls. Incidentally, in the beginning we were named The Watchers, until a band from Chicago sent me a ‘cease and desist’ letter for using the name. So after some thought, I added ‘Ascension Of’ to the moniker, and it aptly described the concept and spirt of the music.”

As we’d moved on to things that people might not know about the band, I asked Burton about some Ascension Of The Watchers’ trivia to round things off. “On four occasions in the band’s history,” he starts, “‘spirits’ have spoken to me while writing or recording Ascension Of The Watchers’ albums. Firstly, during a demo recording of ‘Mars Becoming’, Paul Raven was recording bass in an old convent. I heard the spirits singing during the chorus, which inevitably became the chorus; then, during the album recording for ‘Numinosum’, in El Paso, the room I was sleeping in was haunted by the young girl that passed away while living there, and who whispered her name into my ear as I was awake in the darkness; the song ‘Key To The Cosmos’ was inspired by the true event of my deceased friend speaking to me in the early dawn of winter, relaying comforting words to me during a troubling time in my life. ‘Take care of yourself, and your family.’ The title is a term he frequently used. And the whisper at the beginning of the song ‘Apocrypha’ was inadvertently captured between vocal takes, when the vocal booth was empty. Northstone stands on an ancient monastery, and is built with the rocks of said monastery. We have no idea what language it is in, but it is syllabic and tonal. I believe it is a spirit answering my questions.

“My twin brother, Ben Bell, is a musician as well,” he adds in conclusion, “and he sings harmony with me on our version of ‘Sounds Of Silence’ on the ‘Numinosum’ album.”

“And, not so much trivia,” adds Jayce, “but a lot of people in and outside the industry have thought me and Burton were actual brothers for a while, assuming that as we look similar that we are so. The funny, and yet odd, thing about it is that we have similar singing voices, so much so that Burton’s wife mistakes my voice for his, my father mistakes his voice for mine and my girlfriend Jenna can’t tell who is who most of the time! It would be interesting to see if anyone can spot my voice on the ‘Apocrypha’ album as I did a good few backing vocals. But, sorry folks: we most certainly aren’t related!”

‘Apocrypha’ is now available – to order a copy click the link below: 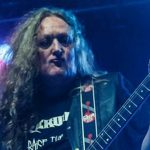 STUDIO REPORTS – with new releases due later this year from Holosade and Rekuiem we check in with Phill Brown and Steve Slater (below) to find out how things are progressing.