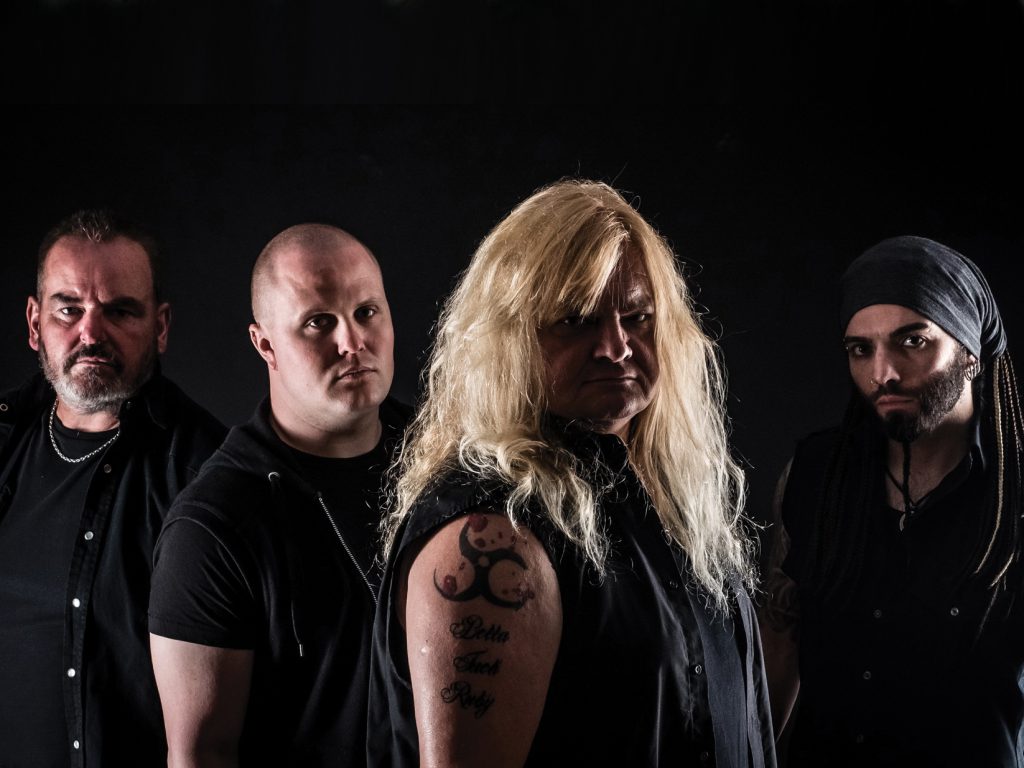 The “Grim Reaper” story took off in 1979, after they successfully fought off hundreds of other bands to win a “Battle of the Bands” competition. This win, combined with a rapidly growing following, aroused the interest of Ebony Records who, seeing the band’s worldwide potential, signed them to a multi-album record deal. This exposed the band to an international audience and led to them touring the U.S many times over. They were now sharing the stage with the likes of Bon Jovi, Ted Nugent, Scorpions and playing to huge audiences, including the 1987 Texas Jam, with over 83,000 fans. At the heart of the band’s success, was the ever powerful voice and incredible stage presence of the band’s front man, Steve Grimmett.

Grim Reaper’s  first album ‘See you in Hell’ was released in 1984 and distributed worldwide through RCA records, selling over ¼ million copies within the first few days! In 1985 their 2nd album ‘Fear no Evil’ was released and 3rd album ‘Rock you to Hell’ in 1987, on RCA records, both receiving as much attention as the first. All 3 albums, to date, have never left the shelves and have been re-released countless times.

Grim Reaper’s profile was further enhanced when all 3 title tracks of their albums were played on episodes of ‘Beavis and Butt Head’; with the writer of the show being a great “Reaper” fan. Grim Reaper is the only band that has had all its title tracks featured on the show. They also had extensive airplay on the radio, TV music channels and constant publicity in the press.

Unfortunately, due to problems with a rouge Label, which resulted in a legal battle, the members of Grim Reaper disbanded just before releasing their 4th and still unheard album, much to the fans upset.

Over the years and to this day, the band’s lead singer and front man, Steve Grimmett, has secured a large and loyal following, particularly in the U.S. and South America.  Following the break-up of “Grim Reaper”, Steve went on to pursue other projects, including singing on Onslaughts ‘In search of sanity’ album, started up his own band ‘Lionsheart’, who released 3 albums and had no.1 hits in Japan and had top 40 hits with Onslaught in the UK. Steve has also performed on many tribute albums and was headhunted to sing ‘Grab your Garmin’ on Garmin’s new video, which was aired to millions at the US Superbowl. Steve’s powerful vocal range is still as strong now as it was over 30 years ago and his loyal fans still turn out in numbers to hear him perform. Steve’s success though is not based on past glories, as more recent gigs have led to a whole new generation of loyal fans.

In April 2006 Grim Reaper were asked to play at the ‘Keep it True Festival’, which led to the formation of ‘Steve Grimmett’s Grim Reaper’. The reception the band received from the fans and press has been so overwhelming that they continue be in huge demand. They are busier now than ever, constantly touring countries all over the world, to increasingly large audiences.